Film / Along With The Gods: The Two Worlds 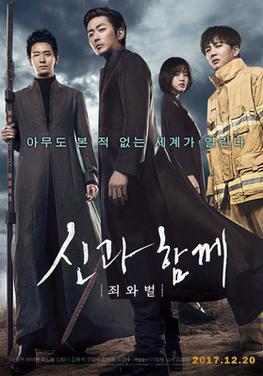 Along with the Gods: The Two Worlds (신과함께-죄와 벌; Sin gwa Hamkke - Joe wa Beol; lit. "Together with God - Sin and Punishment") is a Korean film directed and produced by Kim Yong-hwa and Won Dong-yeon, based on a webtoon created by Joo Ho-min. It was released December 20, 2017.

Kim Ja-hong (played by Cha Tae-hyun) is a firefighter who died in the line of duty. Upon waking up as a ghost, he meets three spiritual guardians: Gang-lim, Haewonmak and Lee Deok-choon (played by Ha Jung-woo, Ju Ji-hoon and Kim Hyang-gi respectively). The guardians inform Ja-hong that he is a paragon, someone who had led an honorable life and therefore is qualified to be reincarnated in just 49 days. The catch is, Ja-hong must stand before the gods of the seven Hells and prove he's innocent of his life's misdeeds in order to be allowed to do so. As the guardians guide him through the afterlife, Ja-hong will find that even after death, the consequences of his actions are far-reaching indeed.

As of February 2018, this movie is the second most viewed film in South Korean film history. A part 2 called Along With The Gods The Last 49 Days was released August 2018.

Along with the Gods: The Two Worlds provide examples of: