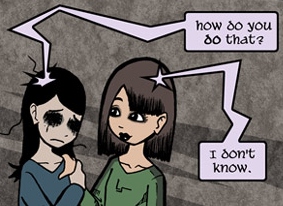 "Anyone watching wouldn't even realize Gamma and Zimmy were talking."

A Psychic Power that establishes a connection between minds. The effects on the linked individuals may vary: they may simply be able to read each others' thoughts or emotions, or the linkage may be thorough enough to cause a complete loss of individuality.

What distinguishes this from normal Empathy or Telepathy is that these individuals can't use their mind-reading powers on the general population, just on the individuals they're bonded to.

If the people bonded happen to have other magical powers, the individuals may be able to borrow or influence them, making them stronger. Conversely, the mixing of different styles might have a negative effect.

A Psychic Link can be the result of either magic, science, or technology.

Technically, the link is mental, but sometimes physical Synchronization also occurs because Your Mind Makes It Real. If one dies while their minds are connected, Psychic Glimpse of Death occurs.

Also, the powers of some Technopaths essentially function like a Psychic Link to a machine. If the power detects the presence of nearby people, it's a Psychic Radar.

Tilly and Andromeda are inspired by a magazine article to form a psychic link and imagine themselves if they had such.

Tilly and Andromeda are inspired by a magazine article to form a psychic link and imagine themselves if they had such.