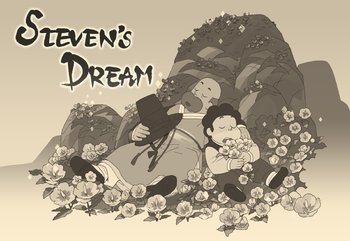 While watching a movie about aliens abducting cows with his father, Steven falls asleep and dreams of a beautiful flowery hill. He is suddenly awakened by Greg, who noticed that he was crying in his sleep. Strange, since Steven claims that the dream didn't make him feel sad.

As Steven is taken back home by his father, he asks him a question:

Steven: Did mom ever talk to you about... Pink Diamond?

Greg explains that he never pressed her for details, as she didn't like talking about it. After all, everyone makes mistakes, and to him, the present matters more than the past.

After getting into bed, Steven once again dreams about the same hill as before. This time, he takes a look around, and sees a broken-down palanquin before waking up, once again in tears. After hearing about this dream, Connie recognizes it from Buddy Budwick's journal. The two ask the Crystal Gems about it, but aside from Amethyst not knowing anything about it, the others refuse to explain and forbid Steven from investigating any further, leading to a brief shouting match and Steven exiting the house in anger.

Outside, Garnet tries to calmly explain to Steven that he shouldn't go, but admits that she can't tell him why, or he'd only want to go more. This makes Steven even more curious. Further interrogation causes her to let slip why she can't go with him:

Of course, knowing that an unknown character is involved only further increases Steven's interest. Steven asks Greg for help, and Cousin Andy uses his plane to take them to the palanquin's location: South Korea. After a bit of sightseeing and relaxation, the two finally reach the hill Steven saw in his dream, and as they get closer, Steven's tears get bigger. Behind a fenced-off area, they find a palanquin, but this one looks different. Whereas the palanquin Steven saw was broken down and pink, this one is in perfect condition and colored blue. They realize that they're looking at a different palanquin when they overhear a gigantic hooded figure, accompanied by a Pearl, talking to the pink palanquin: Blue Diamond.

Blue Diamond: I'm sorry... I'm so sorry. I should have done more. Yellow says it'll all be over soon. I wonder what you would think. This is your planet after all. I still think it is.

As Steven's crying grows even stronger, he realizes that in his dreams, he'd been seeing through her eyes and crying her tears. They are overheard by the Pearl, and Greg reveals himself in an attempt to defuse the situation. Blue Diamond requests to see him, and praises humanity's tenacity as well as explaining that this location is the spot where Pink Diamond was shattered. As Greg offers his condolences, Blue Diamond is touched by his understanding, and, still mistakenly believing that the Cluster will destroy the Earth soon, grabs him and takes him onto her ship in order to save one last human. Steven uses his floating powers to try and catch the ship, but it warps away before he can. As he falls, Garnet jumps up and catches him. After both apologize to each other, Garnet tells Steven the plan: