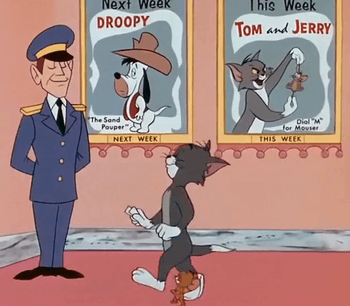 "Nice try fellas, but your Tom and Jerry costumes are pretty bad."
Jay: Is it weird that the "Ghostbusters Theme Song" is now in the Ghostbusters universe? I always thought that was odd.
Mike: Yes, yes. And it's also weird that they changed their logo to say "II".
Jay: That makes no sense. Their company is not a sequel!
— Half in the Bag rifftrack of Ghostbusters II
Advertisement:

When a work or set of works that appeared to stand on its own in Real Life turns out to be fiction Very Loosely Based on a True Story in its greater universe. Spider-Man exists, and he knows people make comic books about his exploits, but they aren't necessarily accurate.

Occasionally, the producers of a new production in an existing universe want to tie it in with the current real life present, but face the problem of trying to get people to believe it's set in the real world when they obviously have the fictional product right before them.

So: Why not make that explicit? Simply make the series itself a fictionalized account of real events.

This often leads to Retcon, Mind Screw, or "Rashomon"-Style, and may even allow the characters to criticize the author or the work itself. More casually they may jocularly inform the audience or the Audience Surrogate that it's not quite how it really happened, and that the story you've been reading contains some stretchers, to be sure.

This trope is related to the Direct Line to the Author with a touch of Retcon and Story Within A Story for good measure. In the case of a fictional character being the cause of a real-world or alternate canon event, see Been There, Shaped History. See also Celebrity Paradox.

Developer's Room is a subtrope specific to video games where the player can encounter the developers who programmed the game.

Often overlaps with A True Story in My Universe. Because there seems to be some confusion between Recursive Canon and Direct Line to the Author, the distinction is as follows:

Compare with Recursive Fanfiction, where a work of fanfiction becomes so popular it starts spawning its own fanfiction, and the levels are now of fandoms rather than verses.

A subtrope of Recursive Reality. See also Celebrity Paradox, Daydream Believer, "Rashomon"-Style, Mutually Fictional, Who Writes This Crap?!, Who Would Want to Watch Us?.

Not to be confused with Canon Immigrant.