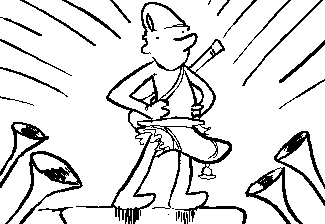 In Cod they Trust.
Your hands tremble as they clutch your humble instrument. You think to yourself "This is it. This is where all the hard work pays off. This is a bard's time to shine!"
Advertisement:

> Choose your path to cod-given glory.

is the second MS Paint Adventures comic, written by Andrew Hussie. Unlike its predecessor Jailbreak, it was the first attempt to use Gamebook-style branching story paths that didn't lead into one another. It was also the first to have a definite plot — you are a bard tasked to perform for a bored king, but after proving your mettle to him, are appointed the kingdom's head Dragon Slayer and set off to do just that.

The story was cancelled before Hussie started up work on Problem Sleuth, starting and finishing in 2007 with only 47 pages to its name. It also holds the distinction of being the only adventure without a definitive end, since Jailbreak received one in 2011.

> Find a trope that strikes your fancy:

> Look for more tropes in your immediate vicinity.