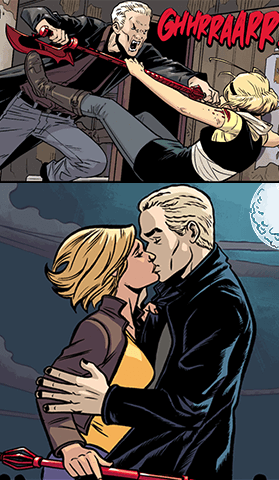 He is, for the record, the second vampire she's dated.
Sometimes a Hunter of Monsters ends up really hitting it off with... well, a monster. Be it vampires, werewolves, demons, or some other traditionally monstrous creature given the Hotter and Sexier treatment; as long as they end up romantically or sexually entangled with someone who's supposed to be hunting them down, they qualify. Note that while this pairing is between a human hunter and a supernatural prey more often than it's not, it is entirely possible for it to be between two supernaturals.
Advertisement:

This trope tends to play out in one of two ways; either the Bob and Alice fall for each other with one or both of them not realizing that Bob is a vampire and Alice is a Vampire Hunter, or Bob and Alice already know they're sworn enemies but are either forced to work together for long enough, or have been fighting each other for so long, that they develop an Inconvenient Attraction. This obviously leads to much drama, as Alice and her friends might have killed Bob's vampire buddies, or vice-versa. If Bob turns out to be a pretty decent guy who acts nothing like what Alice has been lead to believe about vampires, she may come to question the morality of her past vampire slayings. If Alice was Dating Catwoman, Bob may begin to feel wrong about preying on people no different from his beloved and decide to become Friendly Neighbourhood Vampire or even a Hunter of His Own Kind. Grey-and-Grey Morality may come into play if both sides of the conflict have equally valid and/or invalid arguments.

Often leads to Defecting for Love, Heel–Face Turn, Love Redeems, and is almost guaranteed to accompany a boatload of Character Development. Subtrope of Forbidden Love and may lead to Maligned Mixed Marriage. Can overlap with Star-Crossed Lovers if their relationship is strained. Compare In Love with the Mark, Predator Turned Protector, Boy Meets Ghoul, Vampire-Werewolf Love Triangle, Interspecies Romance, and Romantic Vampire Boy.