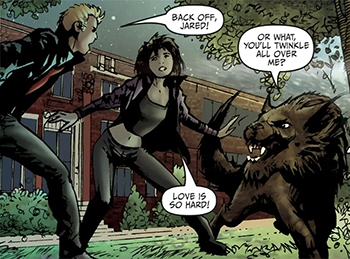 As cheesy as it sounds.
"The vampire is the slick sophisticated guy, the werewolf is the butch blue-collar guy, the girl can only pick one and so on... [...] Plus the vampires mostly have a kind of European thing going on while the werewolves are all Native Americans, so there's a kind of racial-cultural thing happening... All right, you know what? You could probably make a good movie out of that. I mean, they didn't, but... you know... I guess you could."
— MovieBob

This trope is Exactly What It Says on the Tin. When Romance Ensues in a continuity featuring Fur Against Fang, the result tends to end up including a Love Triangle featuring a vampire and a werewolf as two of the three members. Generally the central figure is a human, but not always.