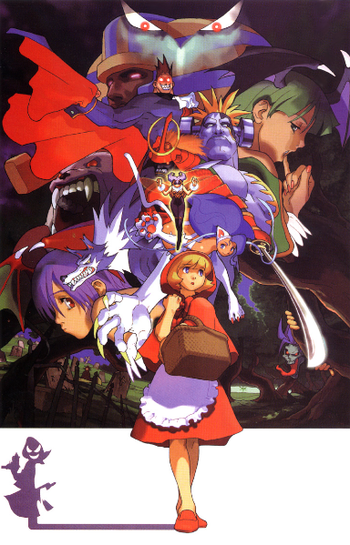 The Darkstalkers series is also notable for having quite a bit of fanservice, specifically due to Morrigan and Felicia (whose designs are unashamedly provocative — in particular, Felicia doesn't even wear clothes). Morrigan is likely best known for her appearances in the various Vs. fighting games — including Marvel vs. Capcom and Capcom vs. SNK — and even more notorious for having the same sprites recycled for over seven years (which caused her to clash in sprite style with just about everyone else). She received new sprites for Namco × Capcom and Cross Edge (which both used a slightly Super-Deformed battle sprite style akin to the preceding Super Gem Fighter: Mini Mix/Pocket Fighter), Tatsunoko vs. Capcom (and Marvel vs. Capcom 3) used 3D graphics, and with another new sprite set in Project × Zone, Morrigan's original sprites (and those of the other nine Darkstalkers to grace one or more of these crossovers) note Felicia, Demitri, Hsien-Ko, Lilith, Jedah, Anakaris, B.B. Hood, Lord Raptor, and Q-Bee appear to be dead for good.

Despite this, Capcom hasn't really "forgotten" about it: Darkstalkers has gotten representation in crossover games such as Project × Zone 2 (which features Morrigan and Demitri as a pair unit, and Felicia as a solo unit) and the Marvel vs. Capcom series (where Morrigan has usually been a playable character since Clash of Super Heroes, and various others such as B.B. Hood, Felicia, Anakaris, Hsien-Ko and Jedah joining in the second,third and fourth games). Yoshinori Ono is still very adamant about reviving the series,

On February 21, 2022, the series would finally be revitalized sorta.... Capcom announced the "Capcom Fighting Collection"

, a compilation of 10 fighting games, half of which are Darkstalkers entries (along with two Mascot Fighters featuring Darkstalkers characters). Unfortunately, the project producer has stated that, at least for now, this collection wil not be used to gauge interest in a future title

, but one can hope. A few months later, it was revealed that the first three games would also be among the titles available for separate purchases through Capcom Arcade 2nd Stadium, the second wave of Capcom's Arcade Stadium series.

Jonathan Talbain was an orphan living peacefully in England until the night of the full moon, when he experienced his first transformation. He was quickly outcast from society. Thinking that in order to control his inner beast he must control his body, he subjected himself to intense Training from Hell. In time, he succeeded, and while the adults didn't accept him back, the children did.

Example of:
Our Werewolves Are Different

Jonathan Talbain was an orphan living peacefully in England until the night of the full moon, when he experienced his first transformation. He was quickly outcast from society. Thinking that in order to control his inner beast he must control his body, he subjected himself to intense Training from Hell. In time, he succeeded, and while the adults didn't accept him back, the children did.