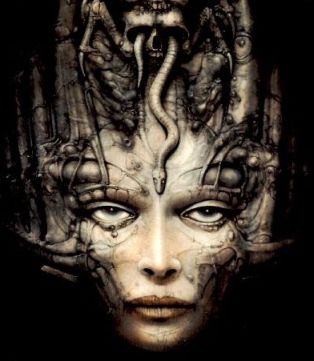 "My head feels like it's going to explode!"
— Mike Dawson, Dark Seed
Advertisement:

A Point-and-Click horror Adventure Game created by Cyberdreams (the same people that would eventually create the Mind Screw known as I Have No Mouth, and I Must Scream) and released in 1992, Dark Seed is based on artwork created by H. R. Giger. The main plot is that of a man named Mike Dawson, a namesake and look-alike of the game's own lead designer, who has moved into a fancy estate in a small town. He soon finds out that it's not all it's cracked up to be, and he ends up trying to save the world in three days from a race of evil aliens called the Ancients. Oh yeah, did we mention he has an alien embryo in his head?

Dark Seed was followed by Dark Seed II in 1995, although this time Giger and Dawson weren't involved.