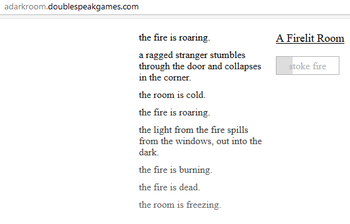 The text is to be read from bottom-to-top.
awake. head throbbing. vision blurry.
Advertisement:

A free browser game developed by Doublespeak Games. Play it for free here

. A mobile version of the game, with additional story events, is available in the iTunes store for iOS devices.

You Wake Up in a Room, a dark one to be precise. As you poke the fire, your surroundings turn into a firelit room, and a ragged stranger rushes in, glad to have found a source of warmth. The stranger soon reveals herself to be a builder, and helps you build a cart, a few traps and a hut — the beginning of a little village. Soon enough, people move in, and you're ready to set up a community of hunters and traders. There's a big world out there, and it's waiting to be explored.

The game is a prime example of Follow the Leader done well, as it was developed as a direct response to the hit game Candy box! (and quickly gained the approval and praise of Candy box! creator Aniwey). It's designed to run quietly in a browser tab much of the time, and to demand the player's attention to varying degrees over the course of the story. It's also notable for its old-school feel and its radical Genre-Busting.

The Ensign is an insanely Nintendo Hard prequel which fleshes out the backstory.

Note: This is a game about discovery, and it is impossible to discuss the game without spoiling certain developments. It is recommended you play through the game yourself at least once before reading this page to preserve the gameplay experience.