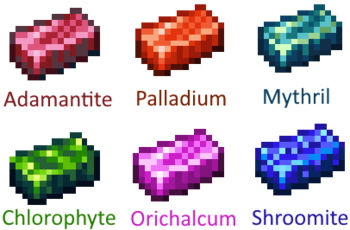 Wait, palladium isn't real?note Yes, palladium is real; it's just not orange-colored
In Real Life, a metal is an element of the periodic table which belongs to one of certain groups/columns and has a specific type crystal lattice with free electrons.note While in Astronomy, everything except hydrogen and helium is a metal, but that's not the point... And there's also metallic hydrogen

... Never mind... In fiction, especially fantasy, a metal is shiny stuff with wonderful properties like super strength, lightness, magic resistance and so on, often not resembling any of the metals found in the periodic table. Metals that are brittle, soft, flammable, react violently with water or air or are otherwise useless for smithing swords and shields from them never appear in fantasy, despite there being a lot of these in Real Life. This trope (a supertrope to Mithril and Orichalcum) describes the "shiny and wondrous" kind of metals.
Advertisement:

Note that this is mostly a Fantasy trope. Science-fiction examples are only good if they are from a work that is "science" in name only (such as four-color comics or space fantasy like Star Wars or Warhammer 40,000); harder-science materials actually explained as high-tech alloys with some verisimilitude aren't. In a nutshell, Wolverine's adamantium and Boba Fett's Mandalorian iron are examples of this trope, but a composite of titanium around a carbon nanotube matrix isn't.

Real Life examples are only allowed if they are in fact occult superstitions (like hard mercury) or well-known hoaxes (like red mercury).

The most often-encountered types of fantasy metal are:

Silver is a real metal, but fiction and folklore treat it as fantastic. Electrum

also exists in Real Life, but can also be magic.

The list of fantasy metals is much longer than that, but most examples are work-specific and should go in the examples list.

A fantasy-specific subtrope of Unobtainium. See also Parodic Table of the Elements, Elemental Crafting (which ranks these and other normal metals and materials by usefulness).