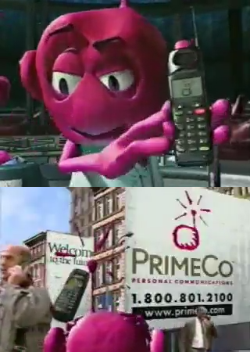 "Behold our superior technology: the mobile wireless telecommunicator!"
"This morning we were able to transmit a mildly amusing image of a cat halfway across the world, suggesting it will be an excellent tool for sharing classified information within our organization. I named this impressive creation the "internetwork", and would be very surprised if it didn't catch on."
— Chief Research Officernote This game is set in The '70s, Xenonauts
Advertisement:

Some science fiction works will have as part of their plot that a noticeable chunk of modern technology was descended from the use of alien science/knowledge in some way: perhaps it was the reverse engineering of Imported Alien Phlebotinum, or possibly the discovery of some Lost Technology left behind by Ancient Astronauts, or maybe we got it from a Captured Super-Entity. At any rate, it's not really ours.

This is usually meant to explain how we've managed so much progress in the past century or so. It can also explain why alien tech is sometimes eerily similar to human tech.

This trope is frequently used as the basis for a Historical In-Joke, the cheapest of which being that the reverse engineering happened at Area 51 and/or was a direct result of the supposed crash in Roswell.

If this is used as a throwaway gag rather than for technology central to the plot, Velcro

is a popular choice, perhaps because it was first popularized by its use in Apollo-era space suits.

Expect varied amounts of success should the writers address the many issues brought up by the characters understanding even the underlying principles of whatever Sufficiently Advanced Alien tech the source was. Same goes if they try to explain how it came to be that an alien toaster could pave the way for the World Wide Web.

Also, a healthy dose of historical revisionism and/or "That was a Cover Story" may be necessary to effectively use this trope considering modern technology can be traced back to human discovery pretty easily.

Works where there are Insufficiently Advanced Aliens instead of humans can also fit this trope.

Compare Technology Uplift, where the passing of technology from the advanced aliens is deliberate.