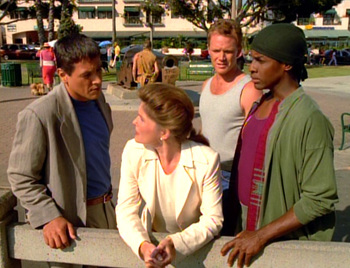 The one with an evil version of Doctor Ehrlich, and Sarah Silverman.

A Starfleet timeship appears out of a temporal rift and opens fire on Voyager without warning. When Janeway can get a word in edgewise, its pilot, one Captain Braxton (Allan Royal), claims that Voyager is responsible for a cataclysm that destroyed Earth and its entire solar system in the 29th Century. Braxton being unwilling to discuss matters, his timeship gets damaged in the subsequent exchange of fire and Voyager is pulled into the rift, emerging at...Earth! The delight of the crew is short-lived when they realise they've returned to 1996, when Earth lay devastated after the Eugenics Wars... or maybe not. And why does 20th Century I.T. entrepreneur Henry Starling (Ed Begley Jr.) have access to 29th Century technology?