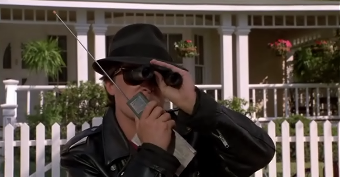 Black clothes? Sunglasses? Binoculars? Walkie-talkie? How does anyone not notice this?
"The good news is if you know you're being followed, they're probably just trying to intimidate you. The dangerous ones would be those that you don't know are following you."
— British Embassy Worker, Them, Adventures with Extremists
Advertisement:

Whenever a character is being tailed, the pursuer will be very obvious to the prey if the prey would only look behind himself/herself. Occasionally this is done deliberately, if the authorities want the suspect to know that they're onto him so that he won't do what he's thinking of doing.

This occurs in a variety of genres, but is most telling in espionage and, to a lesser extent, Crime and Punishment Series, as both the pursued character and the pursuer should have a rudimentary knowledge of surveillance and counter-surveillance. Said tail may be driving a Van in Black.

Note that advanced stories have clever spies use two tails. One is obvious and when the person being tailed shakes them off they are too busy feeling smug to notice the other skillful tail. Other stories avoid this trope by using a Tracking Device on the subject, allowing the followers to follow them much more subtly, unless they discover it of course.

Not to be confused with the thing cat girls have. Or that thang J-Lo has, either. Compare Incredibly Obvious Bug, Overt Operative.