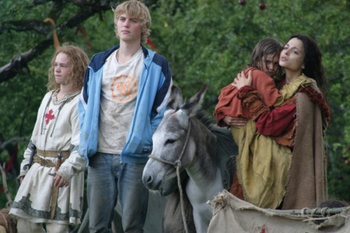 "Oh, should've known, the way you guys are blending in with the local colour. I mean, Flag Girl was bad enough, but U-Boat Captain?"
— Captain Jack Harkness (speaking in World War II London), Doctor Who, "The Empty Child"
Advertisement:

When people are engaged in Time Travel, they will very frequently be wearing clothing that is inappropriate or out of fashion for the time period. After the obligatory initial comments about the time traveler being dressed "very strangely", the locals will all, in effect, shrug and move on, and however bizarre or inappropriate the clothing may be by their standards, they will rarely mention it again. An Improbable Hairstyle doesn't faze the peasants, either. Occasionally caused by Limited Wardrobe. Of course, in some cases, it's not a problem because Fashions Never Change. (And, of course, if it's Halloween, expect at least one instance of Your Costume Needs Work.)

Necessarily averted if you Can't Take Anything with You — which just makes the time traveler stand out more. If time travel allows for multiples of the same person to run around at the same time and they actually do change their jumper, see Differently Dressed Duplicates.

(Note: For those of us Separated by a Common Language, a jumper is a sweater, not a dress for little girls. Or a kind of conductor. Or a guy on a bridge. Or a cable. And it's got nothing to do with that Hayden Christensen movie.)