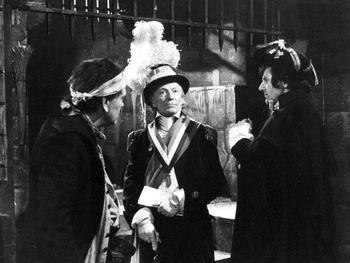 The one where the Doctor gets a silly outfit.

Written by Dennis Spooner. This six-episode serial first aired from August 8 to September 12, 1964.

Episodes: "A Land of Fear", "Guests of Madame Guillotine", "A Change of Identity", "The Tyrant of France" (missing), "A Bargain of Necessity (missing), "Prisoners of Conciergerie".

For the last story of Season One, we're back in history land with this adventure in Revolutionary France.

Moments after Ian offends the Doctor's Hair-Trigger Temper in the last episode, the Doctor unceremoniously parks the TARDIS and kicks Ian and Barbara out, despite Susan's protests. The two humans insist on at the very least checking to see if they're in contemporary England. As it turns out, they're not. It's 1794 during the eponymous Reign of Terror, and the TARDIS crew quickly find themselves involved in a Scarlet Pimpernel-style escape committee saving aristocrats from the guillotine, and are then captured by the French army. The Doctor is locked in a burning farmhouse, while Ian, Barbara and Susan are taken to the Conciergerie Prison, the first stop before the guillotine.

While Barbara and Susan are rescued en route the the guillotine, (after Barbara refuses to do you-know-what with the jailor in exchange for their safety), Ian is trapped in a cell with a dying member of La Résistance. He promises to honour the man's last wish to relay a message, and spends a few more hours locked up with a corpse before successfully stealing a key and escaping.

The Doctor, having been rescued from the fire by a young boy, walks to Paris from the nearby woods (briefly getting sidetracked by a random villain, whom he brains with a shovel) and barters his clothes and ring for an impeccable French official's outfit. Now armed with a silly hat and sash, he barges into the jail and starts a grand Bavarian Fire Drill. After a few episodes of involvement with the rescue group, the traitor among them is exposed, and all that's left is to help English spy James Stirling with a final piece of intelligence gathering before they can all escape. Ian and Barbara pose as innkeepers and bump into a young artillery officer by the name of Napoleon Bonaparte.

Much of the plot turns out to be a setup, and the Doctor quickly realizes that they're in the middle of history and that they can't interfere at all. They find themselves forced to stand by while Maximilien Robespierre gets violently shot in the jaw. The group retreats to the TARDIS, silly hat and all.

And thus ends Season One, with a nice view of the galaxy...

Ian Chesterton : "What are we going to see and learn next, Doctor?"
The Doctor : "Well, unlike the old adage, my boy, our destiny is in the stars, so let's go and search for it..."

The DVD release reconstructed the two missing episodes with off-air recordings of the original soundtracks and new animated visuals.