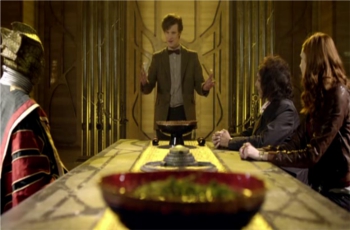 Unintentional foreshadowing, this picture is.note Note Rory's absence...
"Okay. Bringing things to order. The first meeting of representatives of the human race and homo reptilia is now in session. Ha! Never said that before. That's fab. Carry on."
— The Doctor
Advertisement:

The one where Ro... wait, who are we talking about again??

Written by Chris Chibnall. The second part of a two-parter, following on from "The Hungry Earth".

It is the most important day in the history of Earth: the dawn of a new age of harmony or the start of its final war. For the Doctor, it's a battle in which he cannot take sides and a day when nobody must die...

The Doctor and Nasreen try to sneak into the apparently empty Silurian city, but are captured and taken to be examined by the Silurian head scientist, Malohkeh. The Doctor is close to once again fall victim to yet another bit of medical malpractice, but this time he manages to explain to the practitioner that he isn't human, so he survives. However, this knowledge doesn't do too much to placate the leader of the Silurian warrior caste, Restac, an outspoken advocate for the "kill all the primate vermin" policy, who then insists both the Doctor and Nasreen be executed and has them escorted them to a Silurian court. Malohkeh, quite the gentle scholar (once one gets past that whole "vivisecting people to poke a bit at their insides" business), objects to this, preferring to find a peaceful solution, but unfortunately, he has no authority.

Amy and Mo, meanwhile, manage to escape. They find Elliot inside a pod, and many, many sleeping Silurian warriors. They sneak a couple of weapons from them and set out to rescue the Doctor.

They get captured as well, and are about to be executed — unless the humans give them back their hostage. Problem is, Alaya really wanted her war, so she did her darnedest to get a human to kill her — and succeeded. Ambrose electrocuted her after one taunt too many about how her father is going to die and Alaya would be happy to watch.

The humans can't very well tell the Silurians this, so Restac orders the execution of Amy — to be stopped by Eldane, the gentle Silurian leader, who was woken by Malohkeh to stop Restac.

The Doctor brokers discussions between Eldane, and Amy and Nasreen. Humanity is on the brink of a new era of peace and love and justice. Things go relatively well, the Doctor rescues Elliot, and there seems to be a peace offer in the works between the two species. But Malohkeh discovers some suspicious activity around the hibernation champers and decides to investigate. To his horror, he discovers that Restac is awaking a large platoon of warriors to stage a coup against Eldane, and has already made plans to move on the surface despite the outcome of the negotiations, before she kills him, as she can see no use for a good scientist in a war. And it all happens just in time for the "hostage exchange".

Then it's revealed to everybody that Ambrose killed her Silurian captive, and that she's set the drill to destroy the colony if she doesn't get her family back. Restac does not react as Ambrose expected, first demanding Ambrose be executed, then all the humans and anyone standing near them.

The Doctor leads the others back to the laboratory, where he and Eldane devise a plan to destroy the drill and force the warriors back into their hibernation units, to wake in a thousand years when humanity might be ready. Eldane initiates a "toxic fumigation" of the city, causing the warriors to stand down and return to hibernation. Tony stays behind because he needs the Silurians to cure his poisoning, and Nasreen stays behind to be with Tony. The Doctor leads all the other humans into the TARDIS.

So. All is well, right? Of course, it's all oka– oh no. The crack in the universe is here. And it's big enough for the Doctor to stick his hand in. He grabs something using a handkerchief, giving Restac just enough time to reach them and shoot at the Doctor before she dies from the exposure to the toxic gas.

Rory jumps in front of the Doctor. He dies in Amy's arms. And then, just to Woobie up the Doctor some more, the crack in the universe erases him from existence. Despite the Doctor's best efforts, Amy forgets him.

The TARDIS crew run back to the surface, say their goodbyes and encourage Elliott's parents to make him the best human being to live, and to prepare future generations for the Silurians with myths, stories, religion, anything. Amy spots Future Amy across a field alone, and the Doctor rushes her into the TARDIS.

Hey, now's a pretty good time to look at the thing from the crack... it appears to be a burned shard of a police box sign. The worried Doctor compares it to the TARDIS' own sign, and aside from the damage, they appear to be identical.