Recap / Doctor Who S29 E5 "Evolution of the Daleks" 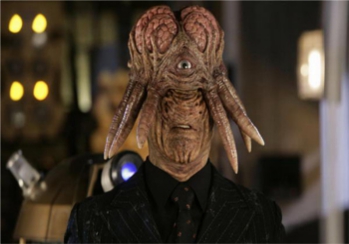 The one where some poor man is stuck looking like a pig forever.

It's still Manhattan and there are still Daleks. They attempt to create a race of Daleks in human bodies, using the Empire State Building as a lightning rod. Dalek Sec is now part human, which the other Daleks really don't like, and he wants to build their Daleks-in-human-bodies army to be part human as well, which the other Daleks like even less.

The Doctor, however, notices that Dalek Sec is developing human emotions, and races to help him, because sometimes one person with the right idea in the right place is all it takes to change the world. At the same time, Martha and Tallulah try to find what alterations the Daleks made to the Empire State Building.

Things get too touchy-feely for the other Daleks, who capture Dalek Sec and go back to the original plan of full-Daleks in human bodies (there's also some typically Dalek extermination of innocent humans, too - no change there!) The newly piggyfied Laszlo helps the Doctor escape, and after "wasting time" hugging Martha, sets off to remove the Dalekenium from the lightning rod.

As Martha improvises a death trap for the Dalek pig slaves, the Doctor fails to remove the Dalekenium, so he throws himself in the way of the lightning. In what will be a continuing theme throughout this series, he screams in absolute agony. The radiation revives the Daleks' army, but the resulting Daleks in human bodies become Time Lord/Dalek hybrids in human bodies instead ("Just that little bit of freedom"). The Doctor is delighted at having created a new species.

Dalek Sec sacrifices himself to save the Doctor and the new hybrid species refuses to shoot him. They start attacking the Daleks instead, and two of the remaining pure Daleks die in the process. Dalek Caan kills off the rest of the hybrids (to the Doctor's dismay), refuses the Doctor's offer of help and escapes. Laszlo is kept alive by the Doctor using the Daleks' genetics lab, although he'll be half-pig forever. Talullah doesn't mind.

Alternative Title(s): Doctor Who NSS 3 E 5 Evolution Of The Daleks