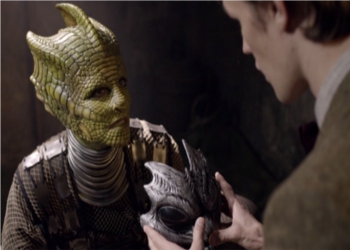 The one where the Doctor should have muzzled a reptile before she martyred herself.

The second two-part story of the the Eleventh Doctor's first series. Written by Chris Chibnall.

It's 2020, near a small Welsh hamlet. The most ambitious drilling project in history has reached deeper beneath the Earth's crust than man has ever gone before, but now the ground itself is fighting back.

The episode starts with Mo, a drill worker, spending some quality reading time with his dyslexic son Elliot, before being reminded by his wife Ambrose that his shift at the local major mining project starts soon. Having witnessed this fairly tender family life scene, it's obvious something will go wrong with the drill when he's the only one on duty, since it's his misfortune to have to fill the quotient of someone getting killed horribly in order to demonstrate how serious the situation really is.

The Doctor, Amy and Rory arrive. (They were aiming for Rio, but the TARDIS disagreed.) The Doctor, never to be dissuaded from something of interest, tunes out Amy's complaints as he examines the strange feel of the ground beneath him and patches of blue grass all over the place. And there are people in the distance waving at them. According to the Doctor, who's the only one to have binoculars on him, it's a ten-years-older Amy and Rory, come to visit the place out of a sense of nostalgia. The Doctor explains that it would be a bad idea to meet up with them, and instead goes to have a look at the big mining thing.

Rory puts Amy's engagement ring in the TARDIS for safekeeping, and gets sidetracked by Elliot and Ambrose, who assume that he's a plainclothes police officer come to investigate the disappearance of people buried in the graveyard, coffins and all. On the surface the graves haven't been touched, and it's as if the ground has all but swallowed them up.

Amy and the Doctor sonic-and-enter the premises of the drilling project, and come across Dr. Nasreen Chaudhry and Tony Mack, the two people directing this project. They're trying to work out what's wrong with the drill, where Mo went to, and where that big hole in the floor came from. The Doctor's most worried by the last, especially since it's started to steam. And of course he's right, as the ground situated under the room begins to tremble and more holes appear in the floor in quick succession. Nasreen and the Doctor make it to safety, but Tony gets stuck; Amy dashes to help him instead of making her own escape, and she starts getting pulled down into the earth for her trouble. The Doctor tries to pull her back out, but she just gets pulled out of his grasp and under the earth.

The Doctor quickly mobilises the ragtag family into a makeshift army. A pitch-dark barrier dome appears around the area and Elliot disappears, but not before he manages to draw a very accurate map of the area and tremendously helps the Doctor. The Doctor realises that he should have watched the boy more carefully and vows to rescue him.

The Doctor and Nasreen decide to head underground to bargain with the Silurians (remember them?), one of whom is under the watchful eye of Rory, crazed mother Ambrose and Tony, Ambrose's father; they have taken at least three people hostage so far and stung Tony with something nasty. And green. Also, in the middle of all that, Nasreen and Tony discover that they're in love.

Amy is revealed to be in the Silurians' underground science lab, soon to be vivisected while still completely conscious, as frantically warned by Mo, who hasn't completely healed from his ordeal. Also, it's not just one little tribe, as the captured Silurian claims. It's an entire civilisation.