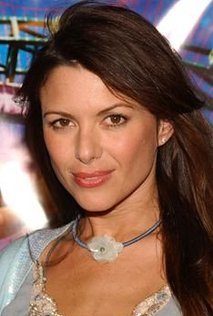 Kari Samantha Wuhrer (born on April 28, 1967 in Brookfield, Connecticut) is an American actress and singer who began her career as a teenager and is best known for her roles as Maggie Beckett in the television series Sliders, Sheriff Samantha Parker in the horror comedy film Eight Legged Freaks, Denise Kalberg in the first Anaconda movie, and Ellen Brody in Sharknado 2: The Second One.
Advertisement:

Wuhrer is also a voice actress who is known for voicing Maria Hill in the very popular Marvel animated series The Avengers: Earth's Mightiest Heroes and reprised her role as the character in the video game Marvel Heroes. She has also voiced Black Canary in Justice League: Crisis on Two Earths and the Silver Banshee in Batman Unlimited: Monster Mayhem.