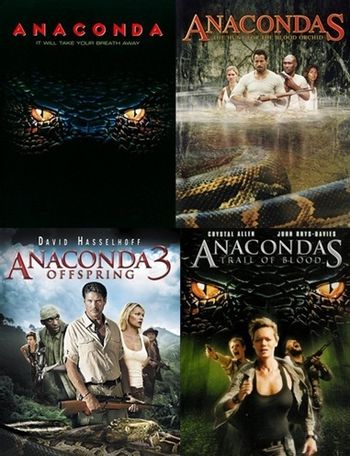 Anaconda is a 1997 monster movie with an All-Star Cast ranging from Owen Wilson to Jon Voight to Jennifer Lopez to Ice Cube on the hunt (in their own various ways) for the eponymous giant snake. Largely notable for Jon Voight as Paul Serone, chewing up scenery with a far greater appetite than any serpent could muster. Frank Welker did the titular beast's vocal effects.

There were three sequels which oddly enough Arc Welded itself across three movies:

The latter two movies were direct-to-video, and all three sequels are considered worse than the original. A fourth sequel (Lake Placid vs. Anaconda), a crossover with Lake Placid, was released in 2015.

Has nothing to do with the Nicki Minaj song.