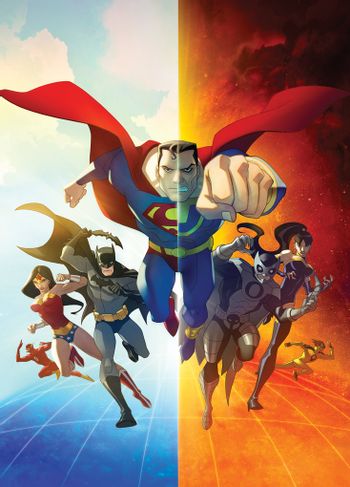 Somewhere, in another universe, there is another Earth where life is reversed. The human heart is on the right side, and people who we know to be supervillains on our Earth, such as Lex Luthor and Slade Wilson, are some of this mirror-world's greatest heroes. But on the other end of the spectrum, there is the Crime Syndicate. Made up of Evil Counterparts of the Justice League, they run an empire of organized, superpowered crime that has all but taken over the world. Lex Luthor, in a desperate attempt to stop them, crosses over to the mainstream DC Universe to ask the League for help. The League agrees, but they're facing off against a world overflowing with supervillains—and Owlman (the counterpart to Batman) has his own deadly agenda...

This direct-to-DVD film, part of the DC Universe Animated Original Movies line, is based on Grant Morrison and Frank Quitely's JLA - Earth 2. It was originally planned as a Justice League Unlimited prequel film, dealing with how the League decided to make the jump to Heroes Unlimited after Starcrossed, but after JLU ended, the project was briefly shelved before being rewritten to be a separate continuity. Still, the tone is perfect for a DCAU entry, and the JLU roots are still very obvious—it's implied that this version of the League used to include Hawkgirl, the Flash has the same characterization as JLU, the Watchtower is in the middle of being rebuilt, and Heroes Unlimited is a plot point.

An important fact to keep in mind is that, despite the similarities between the two factions, the Crime Syndicate of America is not composed of Mirror Selves of the Justice League of America. Though not explained within the film itself, the members of the Syndicate have different personal and professional backgrounds, with both different origins for their superpowers and different secret identities note  Ultraman is not Kryptonian, Owlman is Thomas Wayne Jr. rather than Bruce Wayne, Superwoman is a counterpart to Mary Marvel rather than Wonder Woman, etc. . This is why the "twins" have different voice-actors note bar Green Lantern and great physical differences from their counterparts; they are actually not the same people as those in the League.

The DVD was re-released with both DVD and Blu-Ray versions embedded in a hardcover edition of JLA - Earth 2.

After being told by Owlman how alike they are in their mindsets, Batman tells him there's a key difference between them

Example of:
Not So Similar

After being told by Owlman how alike they are in their mindsets, Batman tells him there's a key difference between them