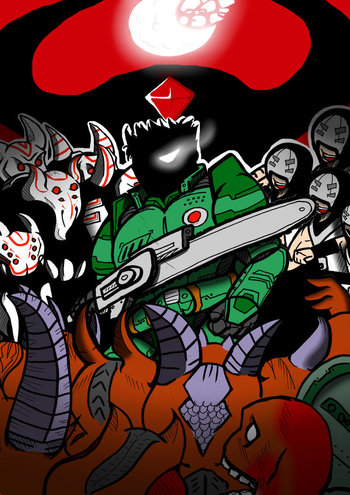 There's going to be a lot more of the color red in this picture momentarily...note cover art by xXTheOneGuyXx

(Deviantart)
She is purity, defiance, righteousness, strength...
They are rage, brutal, without mercy...
But You, You will be worse...
Rip and tear...
Until it is done...
— Intro to Remnant Inferis: DOOM
Advertisement:

Taking place shortly after the events of DOOM (2016), our Anti-Hero, the Doom Slayer, is transported to Remnant, a world besieged by the Creatures of Grimm, their mysterious creator and her minions, an organization of half-animal militant supremacists and evil corporations that just can't help but mess around with the unknown.

Oh, yeah...and The Legions of Hell that have seemingly followed him to this new and dangerous frontier.

Surrounded on all sides, the Doom Slayer strikes back the only way he knows how...

…and hopefully not blow up what's left of the planet in the process.

, focusing on Adam's insanity and PTSD from his encounter with the Slayer.

, which shows the perspective of the Ace Ops and General Ironwood during the horrors of the demon invasion.