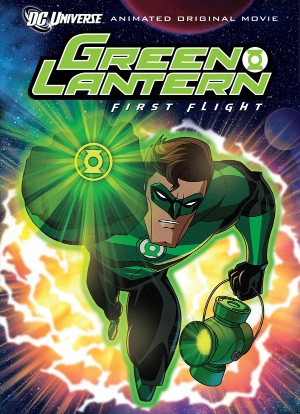 Green Lantern: First Flight is a movie based upon the poster child for the Green Lantern comics, Hal Jordan. The film is part of the DC Universe Animated Original Movies line.

In the midst of flight training, Hal (Christopher Meloni) is forcibly summoned by a nearby alien who was near death, Abin Sur. Given the Green Lantern Ring, he quickly adapts to its powers, but discovers he is one of The Chosen Many of the Green Lantern Corps. Taken to Oa, the central hub of the Corps, he is given to Sinestro (Victor Garber) to be trained and attempt to prove himself worthy of the ring.

Hal is pulled into the intergalactic politics as he finds Abin Sur's murderer and a conspiracy involving the criminal Kanjar Ro. What he also discovers is that the mission was given a high priority because Kanjar Ro is searching for the dangerous Yellow Element, the only weakness to the Green Lantern powers.

The next animated Green Lantern movie, Green Lantern: Emerald Knights shares the same art style with this film, but is not part of the same continuity.