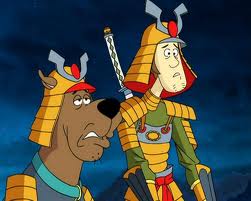 Thirteenth direct-to-video Scooby-Doo film produced by Warner Bros. Animation, Scooby-Doo and the Samurai Sword was (thus far) the final production animated in the same style as What's New, Scooby-Doo?; in addition, this film featured Casey Kasem's final performance as Shaggy Rogers. It was produced and completed in 2008, but held over to early 2009 for release (presumably so its' sister movie, Scooby-Doo! and the Goblin King, could be released first for the Halloween season.)

So, we have the Scooby Doo Gang coming to Tokyo, Japan so Daphne can compete in a martial arts contest at a prestigious school. Before heading to the school in a fully functioning robotic plane, they meet up with Daphne's friend Miyumi, who is also a student. However, at the tournament, Mr. Takagawa, the curator at a Tokyo museum of ancient history, tries explaining to Mirimoto, the head of the tournament, that an ancient evil known as the Black Samurai has risen, and will be after a scroll in the school known as the Destiny Scroll. That night, the Black Samurai and his ninja robots attack during a feast, stealing what he thinks is the destiny scroll, but is actually only a copy.

This is a list of examples of Tropes that this films provides:

I guess this isn't the best time for Fred to say "Let's split up and search for clues"...

I guess this isn't the best time for Fred to say "Let's split up and search for clues"...