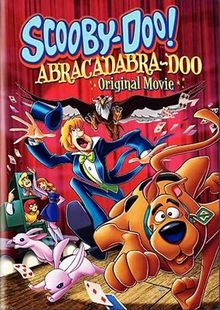 The 14th installment in the Scooby-Doo direct-to-video movies produced by who else? Warner Bros. Animation. This direct-to-video now features a new style of improved animated format with a darker, more realistic look similar to Scooby-Doo on Zombie Island than the cheaper previous movies, not to mention the gang return to their original outfits and designs from the 1969 series. The movie sold well on iTunes, reaching the top ten on the Kids & Family movies charts and the top 40 on the iTunes movie charts.
Advertisement:

This is the first film in the series where theatrical Shaggy, Matthew Lillard, does the voice of Shaggy.

Velma receives a call to check on her sister, Madelyn, who's attending school at the Whirlen Merlin Magic Academy. Unfortunately, there are rumors of a Gryphon terrorizing students, and Madelyn remains one of the only students left. When Mystery Inc. arrives, the school requests their help to solve the mystery of the gryphon attacks. Could it be Calvin Curdles, a wealthy businessman who wants the castle for himself? Or maybe Amos, the creepy groundskeeper for the castle? And what about Alma, the maid? And what's with the way Madelyn looks at Shaggy? And is Fred falling for Whirlen's former stage assistant, Crystal?