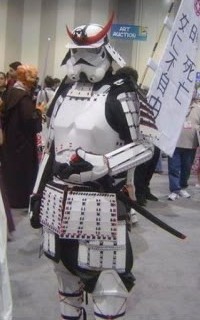 Man, wouldn't the movies have been even better with this?note And it almost happened in the early drafts. To an extent, Darth Vader's armour is based on samurai gear.
"Hey, That's not fair! How come he gets to be a samurai? That's so much cooler!"
— Odd Della Robbia, Code Lyoko prequel "XANA Awakens"
Advertisement:

The tendency of some writers to just throw in a samurai for the heck of it, even in modern urban Japan or a western world without a Japanese Counterpart Culture. And also the fact that people tend to dig the samurai. Who doesn't dig Sanger?

This is NOT the same as Katanas Are Just Better, this refers to samurai, even when they appear without katana (Sanjuro, for instance).

Rule of Cool may be responsible...