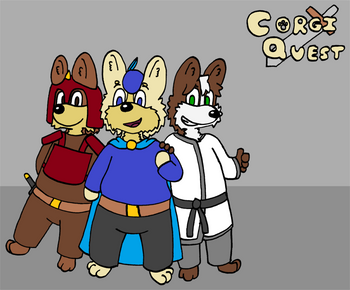 is an Interactive Comic hosted on the MSPA Forums.

The plot (what little there is, at least) follows Bonabelle Fuzzmuffin III, an anthropomorphic corgi bard and his quest to find the Encorgidion, a magic book hidden in the unnamed dungeon that serves as the setting for the entire adventure. As he progresses in his quest, he is joined by Kousuke Shiba, Huo Quan Shan Guo, Baroness Puffington von Berrywing, and Privious de la Cage'd. Although most events have operated on Rule of Funny, it has become increasingly apparent that there is more happening in this dungeon than meets the eye...

The comic relies on Pathfinder rules for, well, just about everything, and the author has full character sheets available for everyone in the main party, which are kept up-to-date with events in the comic.

The author has started an ask blog

where the party will answer questions from the readers. The adventure also has a wiki here

This adventure contains the following tropes: