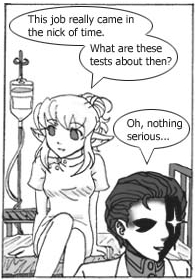 A fantasy take on Alien Nation, in which fantasy species find themselves in the human world, trying to adapt. Actually attempts to take a more realistic take on this (to some extent), with all the paranoia, Fantastic Racism and bureaucracy that would actually happen. The main story follows Noelle, a rather petulant and very determined elf, who tries her hardest to get a job and stay off the streets, while having to deal with not only her human enemies and plain apathy, but also a set of hangers-on who make her life complicated, and a burgeoning invasion attempt by dark elves.

Notable for a story with an unusual amount of development and surprises.

Other than Noelle, main characters include: