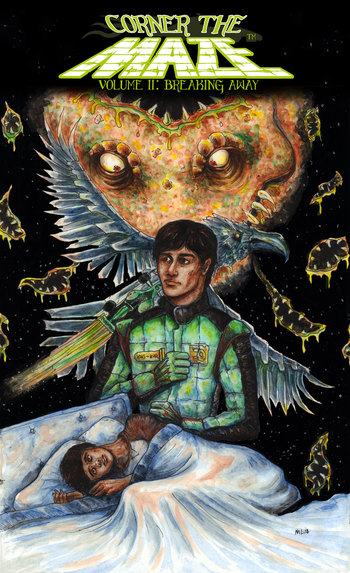 Chimalli, with Garlathax in the background from the Volume II cover

is an urban fantasy webcomic by Morgan Lees, which began in August 2016 and has updated twice a week on Tuesday and Thursday since then.

The plot follows Chimalli Ramírez, a racing driver who finds himself stranded in another dimension after veering off track during a sudden rain storm in his debut race for his new team. Unsure whether he hit the wall or actually went through the strange glowing green portal, he just wants to get home and finish the race.

Soon after his arrival in the Maze, the realm of dreams and corridor between the Otherworld and the mortal realms, Chimalli is attacked by demons. The Order of the Gate is there to bail him out, and after rescuing him, their leader asks him to help them defeat the demon-lord Shoxoth. He's not interested.

[Corner the Maze] contains example of: