Getting Smilies Painted on Your Soul 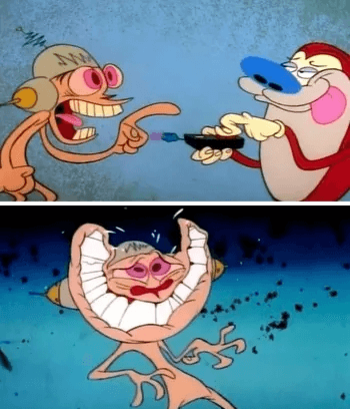 A character is made happy against their will. Although maybe unwelcome, the happiness is real: The character is actually happy, not merely forced to pretend. This may be done by drugs, Psychic Powers, Brainwashing for the Greater Good or simple persuasion. This trope comes in many flavors: The happiness can be blissful, romantic, purely sexualized, or whatever.

Related to Lotus-Eater Machine, but the character is aware of what's happening to them and isn't entirely disconnected from the surrounding world. Also related to Love Potion, although that one is usually not pleasant, and Glamour, where a crowd is made to perceive a character as beautiful and perfect and their very best friend. Not to be confused with Happiness Is Mandatory, which doesn't actually help people to be happy — but if they are, then it's Happiness in Mind Control.

Sometimes done by a Totalitarian Utilitarian person or organisation. Dystopia Is Hard, what with The Evils of Free Will and all, but this eliminates a lot of the potential headaches in one fell swoop. When done on a sufficiently large scale, it usually results in a Crapsaccharine World or Assimilation Plot... or both. When used as a weapon, this is a Care-Bear Stare.

Stimpy invents a helmet that turns his friend into a happy maniac.

Stimpy invents a helmet that turns his friend into a happy maniac.