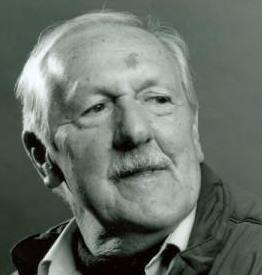 Brian W. Aldiss OBE (18 August 1925 — 19 August 2017) was a British author, primarily of Science Fiction, although he also wrote general fiction and some non-fiction. His early works, from The '50s, generally had a more literary bent than the typical SF of that era, and in the The '60s, he joined the New Wave Science Fiction movement, which promoted more experimental and literary forms of SF. His experimental novel, Barefoot in the Head, is a fairly extreme example. He went on to write a wide variety of SF. His best-known work is probably the Helliconia series.

His short story "Super-Toys Last All Summer Long" was the basis for the movie A.I.: Artificial Intelligence. He's also had a couple of other works adapted for film, including Frankenstein Unbound, which was filmed by Roger Corman.

He also coined the term "Cosy Catastrophe", which has gone on to achieve trope status.

He was given a SFWA Grand Master Award in 2000.