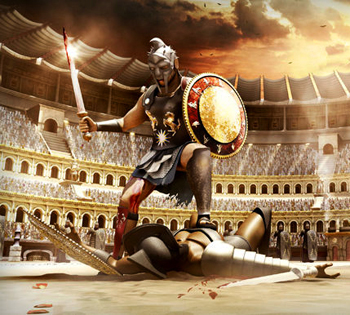 "ARE YOU NOT ENTERTAINED?!"
"You honor the arena with your combat. May your swords and shield preserve the peace."
— Raanu, BIONICLE
Advertisement:

Because nothing says decadent and evil like death and carnage as a spectator sport.

People — criminals or slaves — are forced to fight each other or savage monsters. Sword and Sorcery (especially Sword and Sandal) and Lost World stories are particularly fond of the monsters; a good way to show them off. As a Blood Sport, this may last for a time, with many bouts, allowing the gladiators time to train; either the character can always win, or they do not always insist on death at defeat. The first is more common; the crowds will insist Finish Him!. Conversely, it may be a way of combining executions with amusement — a Death Trap that gets watched — which generally involves animals, as they don't want to deal with the winner.

Monsters used in an arena will fight long after a Real Life animal would retreat. Generally as a result of being starved a bit leading up to the match, as was the practice in the Real Life games.

Sometimes, after a particularly grand victory, the gladiator is freed, but generally ends with either Gladiator Revolt, or gladiators loosing the monsters they fight on the crowd, to great consternation. This trope is distinguished from other forms of recreational combat — such as The Tourney — by one or both sides having no choice but to fight.

On the other hand, this situation was involved in the Trope Namer for Androcles' Lion.

Frequently features in the nastier sort of Bread and Circuses, but it may just be an upperclass entertainment because Aristocrats Are Evil. Contrast The Tourney, which doesn't carry this stigma because the nobles risk themselves rather than compel others to do so.

Very popular in Ancient Rome settings, oddly enough, and in Sword and Sandal settings based on it. Hollywood History comes into play for some of the elements. In Real Life, only around a tenth of fights between professional gladiators actually resulted in death, as gladiators were expensive to train and difficult to replace. In fact, battles to the death were widely advertised specifically because they were so rare. Hollywood gladiators almost always fight to the death. In Real Life, most gladiators who got killed in the end of the fight were either Dirty Coward types, or so badly wounded they were not expected to survive. Criminals condemned to die by the sword were not considered gladiators, and for them death was predetermined.

While gladiators were originally all slaves, over time a class of professional gladiators also emerged.note For non-citizens and impoverished Romans, this provided food and shelter, and if they were skilled enough to survive even the opportunity to earn significant wealth. These voluntary gladiators will very rarely appear in fiction, whereas in Real Life they were often the most skilled fighters in the arenas and by the time of the Roman Empire actually outnumbered the enslaved gladiators. The vast majority of gladiators were men, though female gladiatrices are not unknown to history; at the very least, regulations on the games existed concerning them specifically. It's believed that many women who were drawn to the arena were free citizens motivated by fame, fortune, and independence, or the daughters of retired male gladiators who followed in their fathers' footsteps. That said, the Romans saw them as only an exotic novelty, and many regarded their existence (and of women's athletics in general) as a corruption of traditional Roman gender roles, hence why women were eventually banned from competing in the arena sometime around 200 AD during the reign of Septimius Severus.

The thumbs-up and thumbs-down signals, indicating that less fortunate contestants should be spared or killed are common in fiction, actually can be traced back no further than the 19th century, where Jean-Léon Gérôme's 1872 painting "Pollice Verso" popularized their anachronistic use in ancient settings. There was a gesture of the thumb to indicate either death or life, but nobody knows exactly what it looked like.

When gladiatorial combat appears in a modern setting, it is often a Deadly Game or a Blood Sport. Will often take place in a ThunderDome of some sort and involve a Spectator Casualty or two.

When good guys are forced to participate in death matches, they typically refuse to kill their opponent, finding a way to get out of it.