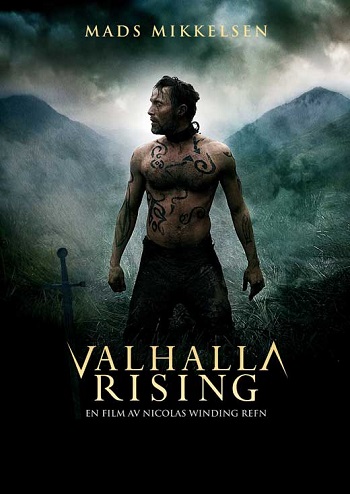 He was brought up out of Hel.
"He's driven by hate. It's how he survives, and why he never loses. He'll come because he has to come; to finish it."
— The Chieftain, on One-Eye
Advertisement:

Valhalla Rising is a 2009 film (released in the States in 2010), directed by Nicolas Winding Refn, starring Mads Mikkelsen. The film was shot entirely in Scotland, and takes place in 1000 AD.

For years, One-Eye, a mute warrior of supernatural strength, has been held prisoner by the chieftain Barde. Aided by a boy, Are, he kills his captors and together they escape, beginning a journey into the heart of darkness. On their flight, One-Eye and Are board a Viking vessel headed out for "the Holy Land", but the ship is soon engulfed by an endless fog that misdirects them to an unknown land. As the new land reveals its secrets and the Vikings meet a ghastly fate, One-Eye discovers his true self.

Tropes featured in Valhalla Rising include: