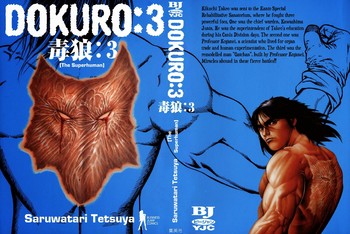 Dokuro (毒狼, lit. "Venom Wolf" but a pun on the word "skull") is a 2005 Seinen manga by Tetsuya Saruwatari of Riki-Oh and High School Exciting Story: Tough fame.

In a Japan where religions are given numerous tax benefits and are engaged in numerous forms of economic activity, Kikuchi Takeo is the best assassin of the Nirvana Church of Creation security department's Canis division, but has turned his back on the church and wants vengeance since they corrupted his mother and turned him into a killing machine.

Not to be confused with Bludgeoning Angel Dokuro-chan (though both have Gorn). Or the video game.