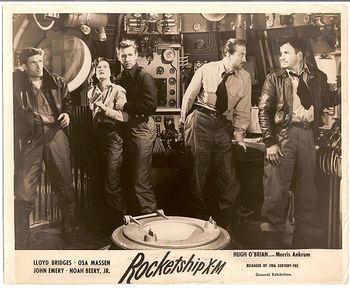 In 1949 Hollywood was abuzz with the news of George Pal's upcoming Destination Moon. Taking advantage of the movie's long production time (due to its extensive special effects), exploitation studio Lippert Productions decided to beat them to the cinemas. The result was Rocketship X-M (AKA Expedition Moon and Rocketship XM-1), filmed in only eighteen days, and released in May 1950. It shows. While competently written and directed by Kurt Neumann (with an uncredited rewrite by Dalton Trumbo) and featuring a game cast led by Lloyd Bridges, the movie contains moments of Fridge Logic, Hollywood Science and Special Effects Failure that decades later were gleefully riffed by Mystery Science Theater 3000.

Four men and one woman hold a hasty press conference before blasting off into space in the RXM (Rocketship Expedition Moon). But a miscalculation in the fuel mixture sends the RXM hurtling off at tremendous velocity, knocking the crew unconscious. Upon waking they discover they're near the planet Mars. Deciding they might as well explore that planet instead, the crew land to discover the remnants of an alien culture literally "bombed back to the Stone Age" after a nuclear war.

Nevertheless, the movie was a great success at the box office and has garnered some staunch fans over the years. One of them — producer Wade Williams — spent six years tracking down a fine grain print of the film which he then restored, even reshooting some of the scenes with special effects models and doubles of the original actors.