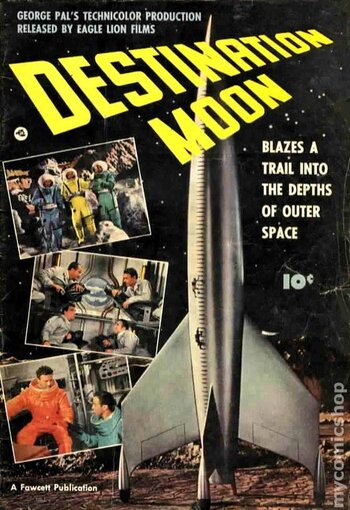 Seven years before Sputnik launched The Space Race, and nineteen before the Apollo 11 landing, this 1950 production by George Pal was the first major science-fiction film produced in the United States that dealt seriously with the prospect, problems, and technology of space travel. It was directed by Irving Pichel.

Frustrated by his failure (implied to be the result of sabotage) to successfully launch an artificial satellite, a scientist approaches US private industry with a grander project: to build a nuclear-powered rocket to land upon The Moon. Sinister forces try to stop the launch via public protest and legal action, and the rocket has to take off ahead of schedule to avoid a court order. After a spacewalk and the obligatory mid-mission crisis, the rocketship lands on the Moon but uses too much reaction mass doing so. Even after stripping their vessel of every spare component, the only way they can get back to Earth is if someone stays behind...

Oh, and did we mention it has Woody Woodpecker (briefly) appearing in it?

. Also not to be confused with Detonation Moon, which is a pun on this films' title.

Dimension X did a radio adaptation