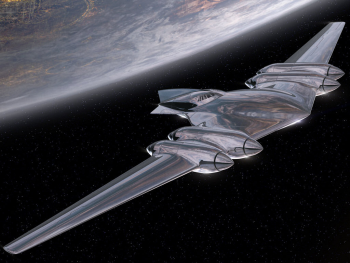 OOH SHINY!
"...now this is my idea of a spaceship — gleaming metal, flashing lights..."
— Arthur Dent, The Hitchhiker's Guide to the Galaxy
Advertisement:

Older and more idealistic Science Fiction features Shiny-Looking Spaceships, often rocket-shaped, which are shiny, pristine and bright in almost all conditions. This trope was pretty much the standard before the 1970s with films like Silent Running (1972), Dark Star (1974), Star Wars: A New Hope (1977) and Alien (1979), which depicted space vessels as lived-in, industrial and/or pragmatic. However, it seems to be making something of a comeback.

For ships that never enter the atmosphere of a planet, this is actually (semi-)realistic. There is no mud or dust in interstellar space to leave grit or dirt on the outsides of passing spaceships, although there are micrometeorites that gradually scuff and erode the surface, so older vessels would have more of a matte hull. A reflective surface would also mean that Frickin' Laser Beams would have a harder time burning a hole in your hull, and you have some degree of innate heat-shielding due to having a high albedo surface.

The interiors of said ships are also often curiously spotless considering how many people are crammed into them for long periods of time. This can be hand waved away by having very efficient air filtering systems or micro/nanoscopic cleaner robots (or just really good visible-scale robots offcamera). It can also be answered with very dedicated crews (as aboard military vessels with many enlisted men and women to keep occupied), or, as in the case of Andromeda's early seasons, the simple fact that the ship is mostly deserted. Or simply by saying that The Bridge is a place where only the Command Roster goes and the Redshirts quarters are less pleasant.

Compare with Retro Rocket and Standard Alien Spaceship, both of which can overlap with this. Contrast with Used Future and Standard Human Spaceship. See also Zeerust, Ascetic Aesthetic.