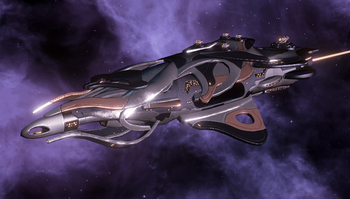 Because a race of Cthulhumanoids aren't going to be content flying around in giant grey bricks.
"The human ships need to be angular and grounded and sensible, so by extension we must make the alien ships curved and sloping and colorful and strange."
— Spacedock, "Why Are Alien Ships Always So Boring?

In science fiction, especially Space Opera, it is common for alien-built spacecraft to have a flowing, smooth, organic-looking appearance, painted in one or two eye-catching colors. The main reasons for this are to set the ship apart from the far more utilitarian-looking Standard Human Spaceship and to reflect the fact that its builders evolved under different circumstances and have their own unique history and culture, influencing their general aesthetic.

Some common traits of this look are:

Also: note that for this trope to come into play, the ship and the aliens who made it must be on a roughly similar Technology Level to their human counterparts. If the ship in question is packed full of super-advanced technologies that are as alien to the outside observer as the ship's design and aesthetic, it means we're dealing an Eldritch Starship instead.

See also Flying Saucer and Shiny-Looking Spaceships, which sometimes overlap with this trope. Contrast Standard Human Spaceship: this trope's opposite. Also contrast with Flying Cutlery Spaceship, for alien ships that are instead outrageously complicated in design.