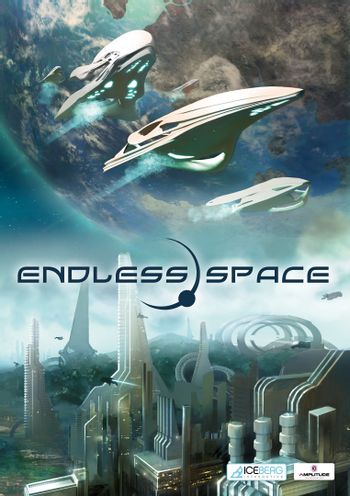 Endless Space is a 4X game from indie developer Amplitude Studios and is in many ways the Spiritual Successor to Master of Orion. Set in the year 3000 AD, the player must chose to lead one of eleven civilizations (or your own) in conquering a galaxy that once belonged to a race of Precursors known only as the Endless. The galaxy is randomly generated each time and can vary in size and shape, depending on how the host player chooses to generate it. The game's economy is centered around four basic resources: food, industry, dust and science, or FIDS. Dust is a substance created by the Endless and has some fairly useful properties.
Advertisement:

A player wins the game when they reach the requirements for a number of victory conditions:

In addition to intricate and addicting gameplay (in typical 4X fashion), the game also runs at least partially on Rule of Funny, giving it a very different tone than others of its genre. Additionally, the developers are allowing the players to actually vote on which features will be included in future updates of the game. Suggestions are also being taken sometimes, such as a new faction and several new achievements (which include the name of the player who suggested them). Finally, there is a Random Event system to create some variety in gameplay.

Not to be confused with Infinite Space or Endless Sky.