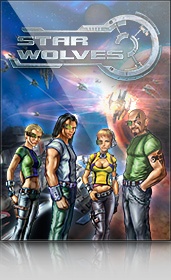 A Ragtag Bunch of Misfits and possibly the very best pilots in human space.

In the distant future, mankind has spread out among the stars. Interstellar travel is common now, enabled by the use of special gates that make travelling from star system to star system simple and easy. However, this does not mean humanity has entered some kind of golden age. On the contrary, planetside life for most people means total domination either by the Emperor of Earth or one of three megacorporations. Those who want to be free of imperial bureaucracy or economic exploitation have to head out to the edges of known space, where asteroid mining stations and freelance interstellar traders can still make a decent living. But with freedom comes chaos, in the form of ravaging pirates, hostile aliens, and rogue AI-controlled ships.

Star Wolves is a series of real-time strategy games with RPG elements. Story aside, essentially what you do is select a mission, fly out into space, blow stuff up, loot the remains of the stuff you blow up, level up your pilots, and buy shiny new gear for the Star Wolf and its fighters. There are three games in the series:

The story of the first game begins with Hero, a trader who gets his vessel blown up and looted by pirates, and who swears to restart his life and get his revenge at the same time. With the aid and financial backing of a few friends, he outfits a large cargo-hauler, the Star Wolf, with armor, shields, and weapons, and throws in a few starfighters to boot. The crew and pilots of the Star Wolf become interstellar mercenaries, making their living by protecting traders, hunting pirates, taking bounty contracts, and salvaging the remains of all who oppose them.

The third takes place in the aftermath of the first. The ongoing civil war has not stopped business from being carried out. A trader in charge of a small trading company has sent out an important and lucrative convoy, which is destroyed under mysterious circumstances. Bankrupted by this and unable to find out what had happened to his people through official channels, he decides to launch an investigation with what resources he has left. As he gathers more information, he finds himself being dragged into events that will shape the future of the universe...

Not to be confused with a similarly named chapter of Space Marines in Warhammer 40,000. Has nothing to do with Wolf from the Star Fox franchise.