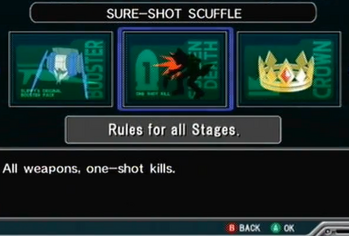 A weapon that defeats foes with one hit and causes the user to die from one hit. It loses its sheen and power after two consecutive uses, but will eventually regain both.
— Description of the One Hit Obliterator, The Legend of Zelda: Breath of the Wild
Advertisement:

When both sides are made up of squishy characters with the means to easily squish the other side, you have a case of Rocket Tag Gameplay. The slightest caress from any weapon in the game will reduce anyone to a fine paste, so the gameplay becomes entirely about hitting first and never getting hit yourself. It could mean that twitch reactions and being the first to attack is vital, it could place huge emphasis on dodging and leading targets, or it might just be a case of camping with extreme patience and never giving your position away, but in any case, being exposed to damage is a swift trip to the Game Over screen or a respawn.

The reasons for this are usually straightforward; attacks do about as much damage as you have health, more or less, and your attacks do the same to them. This changes the relationship your game has with damage considerably. In a regular game, it might be worth it to expose yourself to damage to do some yourself. Here, however, you don't have that option. Concepts like hitpoints and damage per second or per turn fall to the wayside in favor of avoiding being hit, ensuring your attacks land, maximizing weapon range, making sure you always attack first, and taking care not to get hoist by your own petard.

This trope doesn't have to be a bad thing. Fast-paced battles tend to be more exciting than longer and tedious ones, and they may require less Level Grinding. In RPGs, this can make each turn extremely tense, as the stakes are always at their highest. In real-time action games, this allows the inclusion of weapons which are difficult to use, like an extremely slow-moving rocket launcher, for example, because if it connects at all there will be immediate positive feedback (like your opponent exploding). In a real-time strategy game, this can place a greater focus on the "strategy" side and the logistics, as once battle is joined there is almost no time for the player to micro orders to troops before the demise of themselves or the enemy.

An Instakill Mook with low health will always result in this. When this happens in a Boss Battle, you have a Rush Boss. Compare Glass Cannon, One-Hit Kill, One-Hit-Point Wonder and Type 2 Mutual Disadvantage. Related to Begin with a Finisher, where a character opens a fight with their most powerful attack.

This trope applies most of the time to real modern warfare: being directly hit (as opposed to grazed) with just one assault rifle bullet will generally kill you, or, at the very least, greatly reduce your combat effectiveness. In multiple FPS games, this mode of gameplay where all hits are a One-Hit Kill is also called InstaGib; usually, this mode has everyone equipped with sniper weapons and hits can even lead to Ludicrous Gibs.