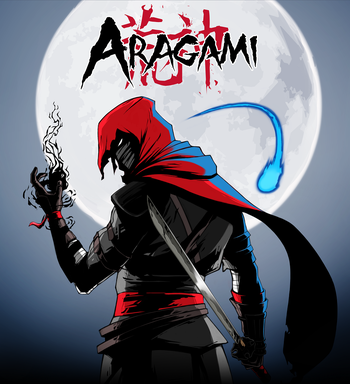 The country of Nisshoku has been defeated and overrun by Kaiho, the army of Light. The Shadow Empress, revered as a god by her people, has been sealed away in the city of Kyuryu. One night, one of the Empress's aides and a powerful sorceress in her own right succeeds in projecting herself out of the seal to summon a vengeful spirit who will help her free the Empress and take back their country.

Gameplay is inspired by Tenchu. It is entirely stealth based, as Aragami cannot take a single hit without dying. However, he is armed with the ability to teleport to any shadow in range, create his own shadows, and more. The game is also encouraged to be replayed multiple times due to its open-ended level design and numerous unlockable powers. Aragami can also blend into the shadows to hide, and the game can be beaten lethally or non-lethally.

A Nintendo Switch version that includes the DLC came out on February 21, 2019.

Not to be confused with the 2003 movie Aragami.