Wound That Will Not Heal 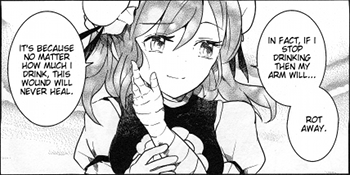 "One evening Sam came into the study and found his master looking very strange. He was very pale and his eyes seemed to see things far away.
'What's the matter, Mr. Frodo?' said Sam.
'I am wounded," he answered, 'wounded; it will never really heal.'"
— The Return of the King
Advertisement:

It's bad enough that scars tend to be permanent and sometimes painful in fiction. The really unlucky, however, get something even worse: a wound that won't heal at all, and remains open and raw long after it ought to have healed.

This usually happens for supernatural or highly symbolic reasons. Perhaps the wound was made by something powerful enough to prevent healing, or it was received as the result of treachery, cowardice, or evil potent enough to force the injured person to pay for their trespass indefinitely. Either way, normal medical care simply won't do the job. Somehow, the wound must be purified and the symbolic meaning behind the injury rectified before the sufferer stands any chance of being healed — if that's even possible. The really unfortunate can never be healed, and spend the rest of their lives in pain...

Compare Scars are Forever and Achey Scars, which at least heal enough to leave a scar, even if it still hurts sometimes and Anti-Regeneration (which interferes with Healing Factors). Contrasts Healing Factor or Healing Hands, as it stagnates if not outright stunts or reverses the effect's recovery ability, nearing it clean into Harmful Healing territory. In video games, this often takes the form of Maximum HP Reduction.

"That Eye Socket is HAUNTED!"

"That Eye Socket is HAUNTED!"