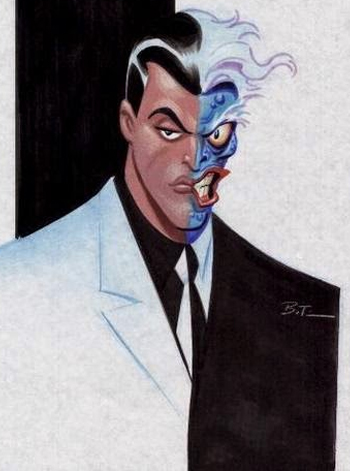 The Batman: The Animated Series version of Two-Face, as drawn by Bruce Timm.
"I am a lawyer. Yes. We the people of the United States, in order to form a more perfect Union, establish justice. Insure domestic tranquility, provide for the common defense, promote the general welfare, and secure of the blessings of liberty to ourselves and our posterity. God bless America.

I am a liar. No. We the acid scarred bitches of history of evil and hypocrisy exalt criminals to office. Vietnam, El Salvador, Chile with lovely missiles, roaring bombs of the rich and the white and the pious and burn children and torture women. Forever and ever, amen. God bless America."
— Arkham Asylum: A Serious House on Serious Earth
Advertisement:

Two-Face is a fictional character, a comic book supervillain who appears in comic books published by DC Comics, and is a prominent member of Batman's Rogues Gallery. Two-Face was originally Harvey Dent, Gotham City's district attorney and an ally of Batman. However, Sal Maroni threw acid at him during a trial, hideously scarring the left side of his face and scarring him mentally as well. Dent went on to adopt the "Two-Face" persona and became a criminal, choosing to bring about good or evil based upon the outcome of a coin flip. The character first appeared in Detective Comics #66 (August 1942), and was created by Bob Kane.

Alongside The Joker and Ra's Al-Ghul, Two-Face is one of Batman's greatest enemies, but not because of the threat he poses to the rest of the world. Instead, he reminds Batman of how far the greatest can fall, and how he cannot save all of his allies - Batman's feelings of guilt that he failed to save his old friends and constant attempts to 'redeem' Dent remain one of the biggest themes of the character.

The character has appeared in multiple Batman media forms, including video games, animation, and the Batman film series. Billy Dee Williams portrayed Harvey Dent in Batman (1989) and later reprised the role in The LEGO Batman Movie (though Harvey never became Two-Face in the original film), Tommy Lee Jones portrayed Two-Face in Batman Forever, Richard Moll voiced the character in Batman: The Animated Series, Aaron Eckhart played both the district attorney and his villainous alter ego in The Dark Knight and William Shatner voices him in Batman vs. Two-Face.