Characters / I Am Batman

Characters in I Am Batman. Namely, Jace Fox and other characters as they appear in his various series and those surrounding them. 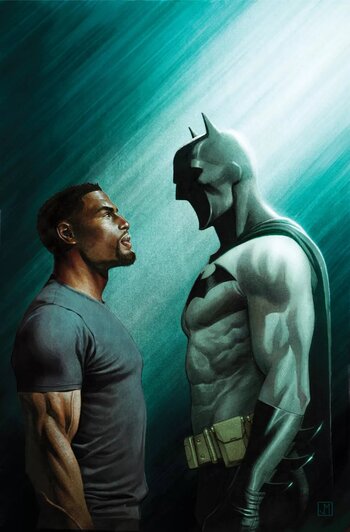 The Next Batman
Click here to see Jace in his Batsuit 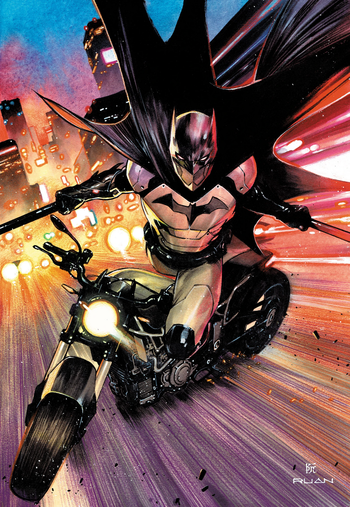 "I'm doing this because I know what happens when people think they're above the law. And if I die trying...I suppose that's justice too."
The enigmatic eldest son of Lucius and Tanya Fox, Timothy Fox was once the notorious Black Sheep of their family. A rebellious youth who during his teenaged years rapidly developed into a hedonistic playboy, indulging in a jet set life of non-stop partying and promiscuous affairs. But on the night of his seventeenth birthday, a neglectful Jace accidentally hit a man with his car, and fled when the dying man asked for help. Running to tell his father, Lucius used all of his resources to create a smear campaign against the victim to protect his son from imprisonment, against Tim's wishes.

Tim became estranged from his family and was shipped off to military school. It was there, he decided to channel the pain of his guilt to reinvent himself into a force for good, going on a self-imposed exile from Gotham to achieve this goal. After spending years refining his skills under various mentors, Tim changed his name to "Jace" and spent the remaining years of his exile as a covert operative who targeted various figures within the criminal underworld who were untouched by the law. However, after Lucius was entrusted with Wayne Enterprises, he summoned his son home. Using his family's vast resources to secretly continue his war on crime, Jace discovered that his father and Bruce Wayne were involved with Batman, and Jace took it upon himself to become the next Batman.

Tropes that apply to Jace Fox: 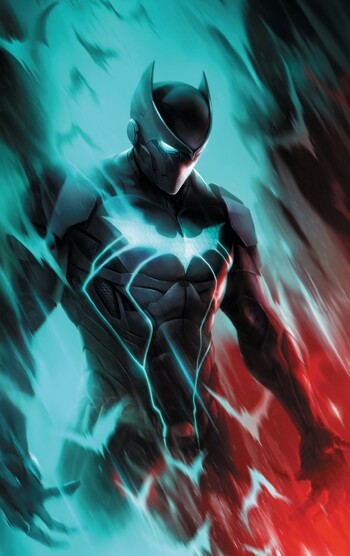 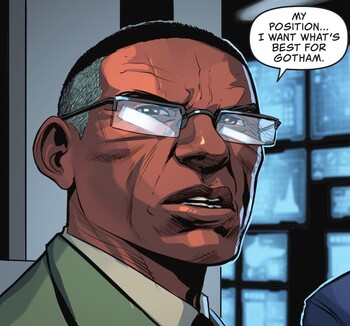 "Even now, safe at home, I'm still with her. I can't free myself of the phantom pain she left inside me. It's a vision that won't end. It's a dream from which I can't wake. How can I...when I'm still living the nightmare? We're still living in their nightmare."
The CEO of Wayne Enterprises, appointed by Bruce Wayne, and the patriarch of the Fox Family. Lucius is an ally of Batman's and knows Bruce's identity, having worked on equipment for the Bat-Family in the past. However, he does not know about the activities of his two sons.

After being physically and psychologically tortured by Punchline during the events of the Joker War, Lucius has become totally disillusioned with masked vigilantes and has grown obsessed with developing an alternative to keeping Gotham City safe which doesn't involve relying on them.
Advertisement:
Tanya Fox

A lawyer, and the matriarch of the Fox family. After what happened to Tam, Tanya has an open disdain for all superheroes, blaming them for bringing supervillains into the world.
Tamara "Tam" Fox 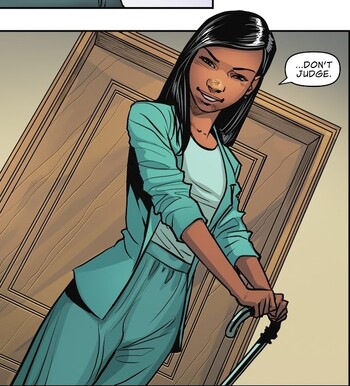 The oldest daughter of the Fox family, studious and well-meaning. Tam was the closest to Jace before he left Gotham, and is glad to have him back. She was previously driven insane by Ratcatcher, but later recovered.

Her condition returns as a result of stress from her family and she enters a vegetative state.
Tiffany "Tiff" Fox 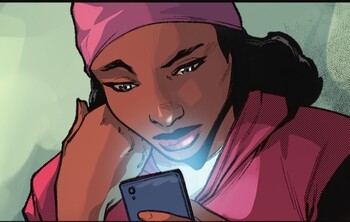 The youngest child in the Fox family. She's excited for her brother's return, and not happy with Luke's treatment of him. She is aware of Luke's life as Batwing.
Advertisement:

"There are questions to be answered. Answering questions is kind of what I live for."
Formerly a Detective at the GCPD, and an out lesbian. Renee Montoya has endured a lot of hardship in regards to her sexuality and descent into alcoholism. But after embracing the teachings of the masked vigilante Vic Sage, Renee would rise to become Vic's successor as The Question. She was also previously in a relationship with Kate Kane.

After the Joker War, Renee was offered the role of commissioner of the GCPD by Mayor Nakano. Knowing that the no-masks policy would be enforced with or without her, Renee accepted the offer, to at least ensure that superheroes would not be killed on the spot. But once the events of Fear State saw the fall of the Magistrate and with it, Nakano's hardline policies against superheroes, Renee donned her mask and fedora once more to recruit the new Batman's help in solving Anarky's murder.
Detective Adriana Chubb

A police officer who was promoted to the rank of Detective when the Joker War severely depleted the GCPD's manpower, Adriana Chubb is introduced as a By-the-Book Cop with a palpaple distate for masked vigilantism. But after the events of Fear State caused her to be transfered to the New York City, Adriana is now forced to work alongside the new Batman as the offical leader of the NYPD's Special Crimes Task Force. 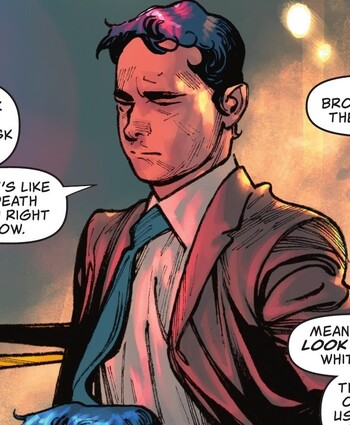 Adriana's long-time partner who was also promoted to Detective due to the events of the Joker War. Whitaker is introduced as the Blue Oni to Adriana's Red, a cool-headed cop who helps reign in his partner's more impulsive instincts. However, he's incredibly conflicted about Gotham's new anti-vigilantism policies enacted by the Nakano Administration.

Hadiyah
"Look, Vol: You, Jace and I share things few people can understand. We're all trying to make up for lives that were lost and the ways they were lost. But I can't fix Jace when I'm still trying to fix myself."
Jace and Vol's friend, who he met after being "exiled" from Gotham, to a school for trouble children of the rich and powerful.
Vol 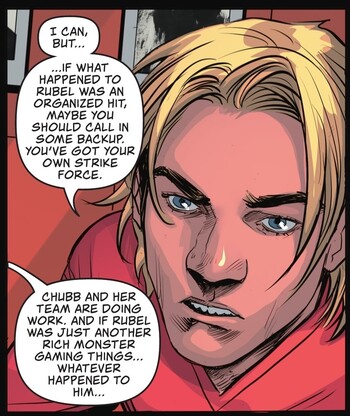 An expert hacker of Russian descent who first met Jace when they both attended the same military academy as teenagers. Vol would become both Jace's handler and tech expert during his days as a covert operative and now supports his old friend's newest endeavors as the next Batman.
Tatsu Yamashiro (Katana) 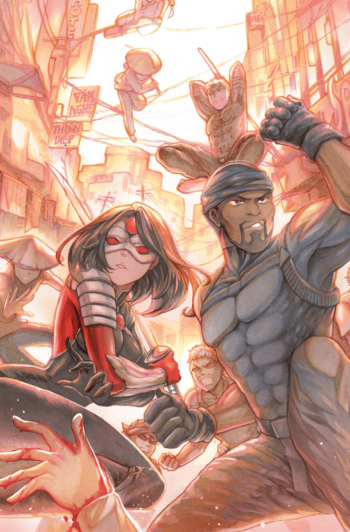 "It's not about you. It's about all the people who care for you. For them, for me...get rid of your guilt. Be a symbol of better things."

A Japanese Crusading Widower who wields a cursed sword that consumes the souls of those slain by it. Tatsu Yamashiro is a deadly vigilante who once served under Amanda Waller, became a founding member of the Outsiders, joined the Justice League of America, and fought alongside the Birds of Prey. But somewhere down the line, Tatsu saved the life of a young Jace Fox who had been imprisoned and tortured in the Eastern European country of Markovia. Sympathizing with his desire to repent for past sins, she became his mentor and played a major part in molding him into the Vigilante Man he is today.

For tropes applying to Tatsu in general, see Katana.

The Mayor of New York City. Determined not to repeat the mistakes Gotham made with their superhero community, Rafael Villanueva believes deputizing the new Batman prowling NYC is the only way to keep the vigilante in check.
Commissioner Pete Becket 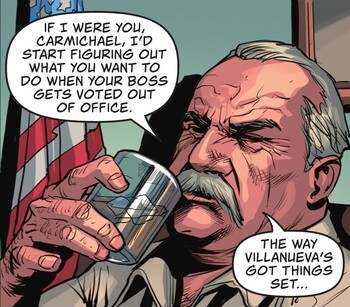 The cynical and abrasive Commissioner of the New York City Police Department. Becket believes the Mayor's endorsement of Batman is a grave mistake that's destined to fail.
Deputy Mayor Carmichael 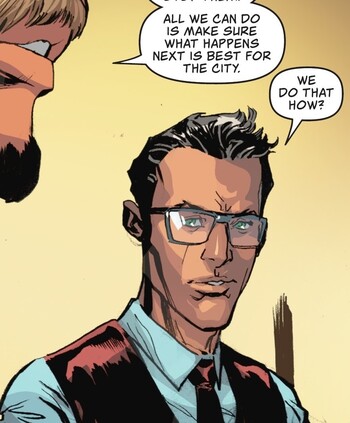 New York's Deputy Mayor of City Affairs. Carmichael is a stoic yet ambitious politician tasked with ensuring the success of the new Special Crimes Task Force

Tyler Arkadine
"You're gonna die, and you don't even know what for."
Tyler Arkadine is an international criminal fronting as a Wealthy Philanthropist who evaded Jace during a botched attempt to infiltrate his Vietnam compound.

Now, Arkadine's plotting has expanded into Gotham City, where he masterminds several false flag operations seemingly to the benefit of the newly established Magistrate. 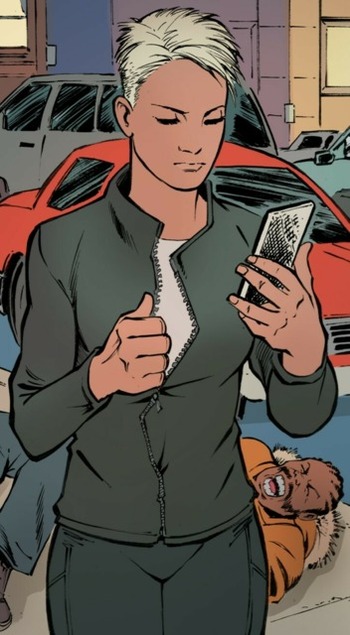 "It's only fun until somebody gets hurt. So let's get ya hurt."

The daughter of a IRA veteran who was an expert in "vanishing" people during The Troubles and trained alongside the Cumann na mBan, a Irish Republican women's paramilitary organization. Eabha O'Roark is a notorious mercenary currently under Arkadine's employ and operates as his primary enforcer in Gotham City. 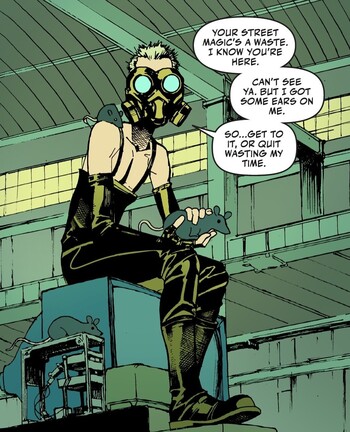 A Gotham City supervillain who can control legions of rats, he has become a sort of gang leader for stray kids in Gotham who have fled to the underground.
Seer 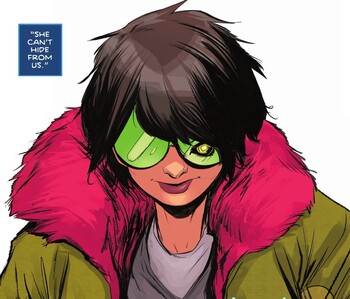 "This city doesn't want your old truth. It wants mine."

A villainous hacker who hijacked Barbara Gordon's Oracle system to enact a massive disinformation campaign against the already panicked masses of Gotham City, driving them to cause even more chaos under the belief that both the Bat-Family and law enforcement could no longer be trusted. After tormenting and outfoxing several heroes across the city, Seer has taken a particular interest in targeting the new Batman attempting to end their reign of terror. 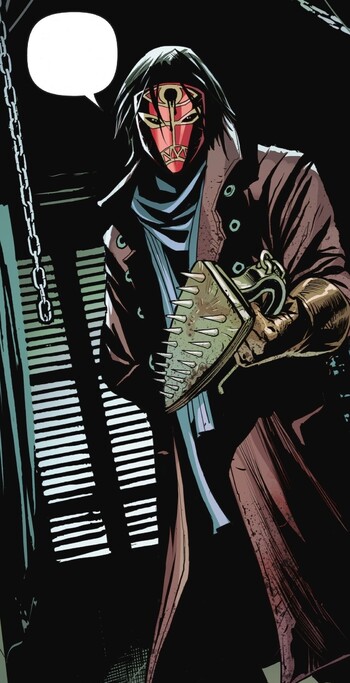 A masked serial killer who debuted shortly after Jace's arrival in New York. He seemingly targets the city's corrupt upper class, horrifically torturing and mutilating his chosen victims before desecrating their bodies into his next ghastly work of art.