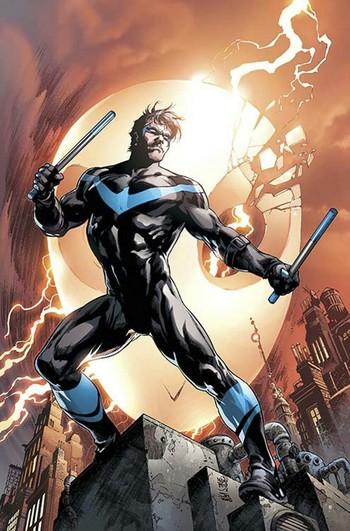 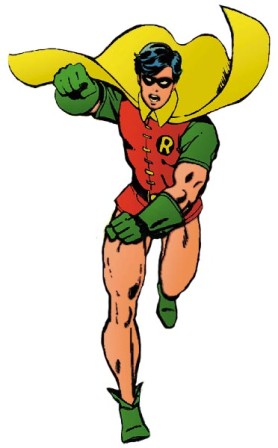 Advertisement:
"If you want Robin to stay dead, that's okay with me. But you've trained me too well — made me what I am. You can't keep me from pursuing my own destiny."

Easily the most famous of the Robins, Dick Grayson was the poster boy for Sidekicks in the Golden Age and Silver Age. With a similar backstory to that of his mentor, Batman (parents murdered by a racketeer who, unlike the mugger in some versions of Batman's origin, was brought to justice or died depending on which story you read), Robin was always there to provide lighthearted commentary and ask questions that the readers themselves are wondering.

Eventually, however, he grew out of his role as a sidekick, and began to argue with the Dark Knight over crime-fighting. This lead to him establishing himself as a solo hero, Nightwing, and became the leader of the Teen Titans, and after Bruce needed further time to recover after kicking Jean-Paul Valley (see below) to the curb, even took over the Batman role himself for some time. He then received a comic book series of his own, detailing his adventures in Gotham's sister city, Bludhaven (even more of a Crapsack World than Gotham). Blüdhaven has since been destroyed (twice!) and after a sojourn back in his Titans' base of New York, Nightwing has now officially moved back to Gotham, being back on good terms with his former mentor. In the wake of Batman RIP and Final Crisis, Dick has since stepped up to the role as Gotham City's official protector, and has once again officially become Batman, this time with an open mandate. When Bruce came back, he even retained his role as Gotham City's Batman for one year of Comic-Book Time.

As of the New 52, Dick is back to being Nightwing. After operating in Gotham for a time, he moved to Chicago and set up a life there. However, Dick was captured and outed by the Crime Syndicate, and forced to fake his death. Working undercover in the spy organization Spyral, Dick operated as Agent 37 alongside Helena Bertinelli. After use of a mind-controlling satellite erases his outing from the minds of the world, and after taking down the darker sides of Spyral, Dick returned to being Nightwing. He'd go on to move to a new version of Bludhaven.

At the beginning of the "Beasts of Burden" story arc of Batman (Tom King), Dick got shot in the head by the KGBeast. Upon recovering, it quickly becomes apparent that he had lost his memory beyond the deaths of his parents. Batman underwent increasingly desperate efforts to restore his partner's memory (up to and including showing him the moment he got shot), only to exacerbate the problem, resulting in Dick rejecting his past, abandoning the Bat-Family in disgust, and returning to Bludhaven to start his life anew as Ric Grayson, up to and torching his old hideout.

He went to live a normal life as a taxi driver. However, his necessity to fight crime eventually led to him returning to crime fighting, even teaming up with a group of vigilantes that used old Nightwing equipment to fight crime. During the The Joker War bat-event, he was kidnapped by the Joker and brainwashed into a crazy minion named Dicky Boy who proceeded to kidnap Barbara Gordon to kill her in combat inside an arena. He was defeated and cured of his brainwashing with the help of his current girlfriend but lost all of his memories as Ric Grayson and returned to lead the Bat-family while Batman fought the Joker.