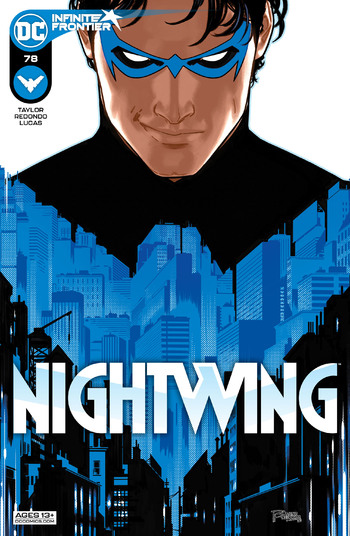 The blue is back.
Master Bruce may feel you should only be a hero when wearing a costume. But I'm glad Dick Grayson steps up when someone is needed. It takes a different hero to help without a mask.
— Alfred Pennyworth
Advertisement:

Nightwing is a 2021 DC superhero comic book. It was relaunched at issue #78 as part of DC Infinite Frontier, and is written by Tom Taylor, with art by Bruno Redondo.

It's been a rough few years for Dick Grayson. First, he was shot in the head and lost his memories. Then, he was manipulated by the Joker. But that's all behind him now — with his memories restored, Dick is back to being Nightwing and ready to take on whatever is in front of him.

Even if that happens to be a poor, abused little puppy in need of saving.

But as Nightwing stops bad guys from (literally) kicking a dog, he is also confronted by the ghosts of his past when Barbara Gordon shows up as the executor of Alfred Pennyworth's will. And there is also the crime boss Blockbuster, ready to crush anyone and everyone in his way. In fact, Blockbuster just killed the Mayor of Bludhaven and handed the Mayorship over to the next in line: Melinda Zucco. Daughter of Tony Zucco, the man who killed Dick's parents.