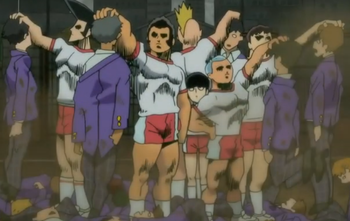 Say you’re a villain. You’re up against a team of heroes and you need a sure-fire way to rattle them. What do you do? Well, the best way to get everybody worked up is to threaten that character, the one who the whole team feels they need to protect. Congratulations, you’ve just found Everyone's Baby Sister (or brother).

When a Big Bad sets this character in their sights, it immediately becomes personal for every other character involved. Somehow, it never occurs to the Big Bad that this may well make the heroes more dangerous, not less.

Everyone's Baby Sister is most common in works where some of the characters do jobs that regularly put them in harm’s way and that exacerbate their protective instincts, and some of the characters work in safer environments where they’re not supposed to be at risk of physical harm. A team composed of law enforcement officials and scientists or analysts is common here. This character will typically be a younger character who is not usually in any sort of physical danger and, thus, may appear physically smaller and weaker than the other characters. Other characters will feel protective of this character because of a combination of their older age, superior physical strength, and sometimes their occupational responsibility. When something happens to a character and even the Jerkass is unsettled by it, you have a winner.

Sometimes these characters inspire this reaction because they’re impossible to dislike. Other times, the character really isn’t very likable at all; it's just that the other characters feel responsible for him or her. Because main characters tend to be the Action Heroes, this character is more often a supporting character than a lead. By coincidence or design, these characters are often dorky Teen Genius types (or early to mid twenties genius, as the case may be), though this is certainly not a prerequisite. These characters also tend to be fan favorites, though this, again, is by no means, necessary. It is not unheard of for The Scrappy to fall under this trope. What’s important here is the reaction of the characters, not of the audience.

Compare and contrast The Chick, The Heart, The Cutie, the Tagalong Kid, Moe, And Your Little Dog, Too!.

Note that this character does not actually have to be anyone’s sister, and a character who is someone’s sister is not guaranteed to fall under this trope.