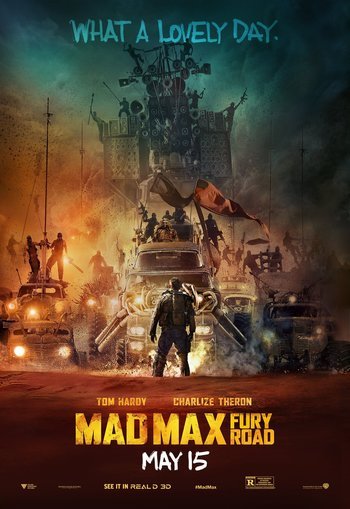 Mad Max: Fury Road is the fourth film in the Mad Max film series; it was released in 2015 after spending some thirty years in Development Hell, and its (standalone) story takes place some time after that of the original Mad Max. Series creator George Miller returned to the driver's seat of his creation, serving as producer, director and writer once more.

Tom Hardy takes over the role of Max Rockatansky, a drifter doing his best to survive in a post-apocalyptic wasteland, running from his personal demons. When he is captured by men who serve the tyrannical warlord Immortan Joe, the dictator keeps him alive as a "blood bag" for his fledgling "War Boys". Some time after Max's capture, Imperator Furiosa (Charlize Theron) — one of Joe's trusted road warriors — betrays her master by freeing his five captive Wives and going on the run with the big tanker truck of Joe's citadel. Max ends up caught in the chase as he and Furiosa work together to escape from Joe, his convoy of War Boys, and other forces that would see them all dead (or worse).

The film's production was delayed by higher-than-normal amounts of rainfall around Broken Hill that made the area too green; filming eventually moved to, and was finished in Namibia. Miller and Fury Road co-writer Brendan McCarthy have already written sequels to this film; the first is titled Mad Max: The Wasteland. However, Miller has since refocused on a Spin-Off prequel centered on the earlier years of Furiosa, set to star Anya Taylor-Joy as the character; the film is due for release on May 24, 2024.

Fury Road has a four-issue prequel miniseries published by Vertigo Comics and written by George Miller, Nico Lathouris and Mark Sexton, with stories spotlighting Joe, Nux, Furiosa, and Max. The graphic novel collection of the miniseries includes a story about the War Rig.

These tropes will ride to Valhalla, shiny and chrome:

open/close all folders
Tropes A to E
Tropes F to K
Tropes L to P
Tropes Q to S
Tropes T to Z
"Oh what a day, WHAT A LOVELY DAY!!!"
Feedback

Max has seen a lot of friends and loved ones die over the years. Combined with his mission to survive everything the wasteland throws at him, it's left the poor man decidedly crazed - as this cavalcade of hallucinations demonstrates.

Max has seen a lot of friends and loved ones die over the years. Combined with his mission to survive everything the wasteland throws at him, it's left the poor man decidedly crazed - as this cavalcade of hallucinations demonstrates.